Rosemarie on the blog here to report about our day watching slopestyle!

In January, Katrina messaged me and said “we could totally go watch an Olympic event while you are in Seoul!” I hadn’t even thought of that option so I was pretty stoked to go see an event (and also that Kat would do all the organizing).

We looked at all the tickets and decided that we would go see the qualification round of Men’s snowboard slopestyle. It was the easiest logistically, not tooooo tooo expensive, and seemed pretty exciting. #YOLO

To get to the event location, we took the first subway from our hotel and then literally ran to catch the first train. The train was about 1.5 hours long, which is about 2/3 the width of South Korea. We were so excited when we got to the Pyeongchang train station, and then immediately realized that there was nothing around the train station at all (hmm how will we occupy ourselves for 3 hours). So, we hopped on to the shuttle to the event venue.

Luckily, there was a cafe right across from the ski hill that we could hang out in for a bit and eat breakfast. The owner/manager of the cafe was SO HAPPY that his cafe was full. 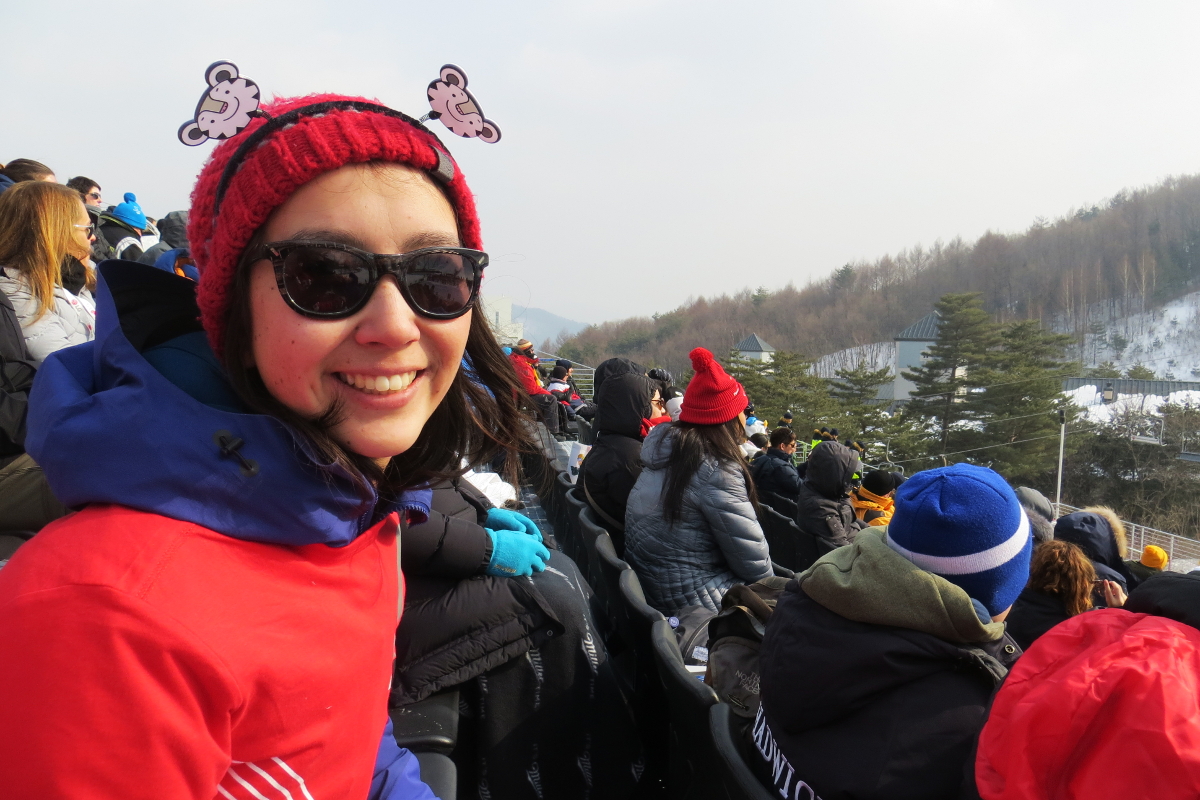 When the event was about ready to start, we entered in the venue, got swagged up and headed up to the stands. From our seats, we could see the bottom 3 jumps and we could watch the rest on a screen. 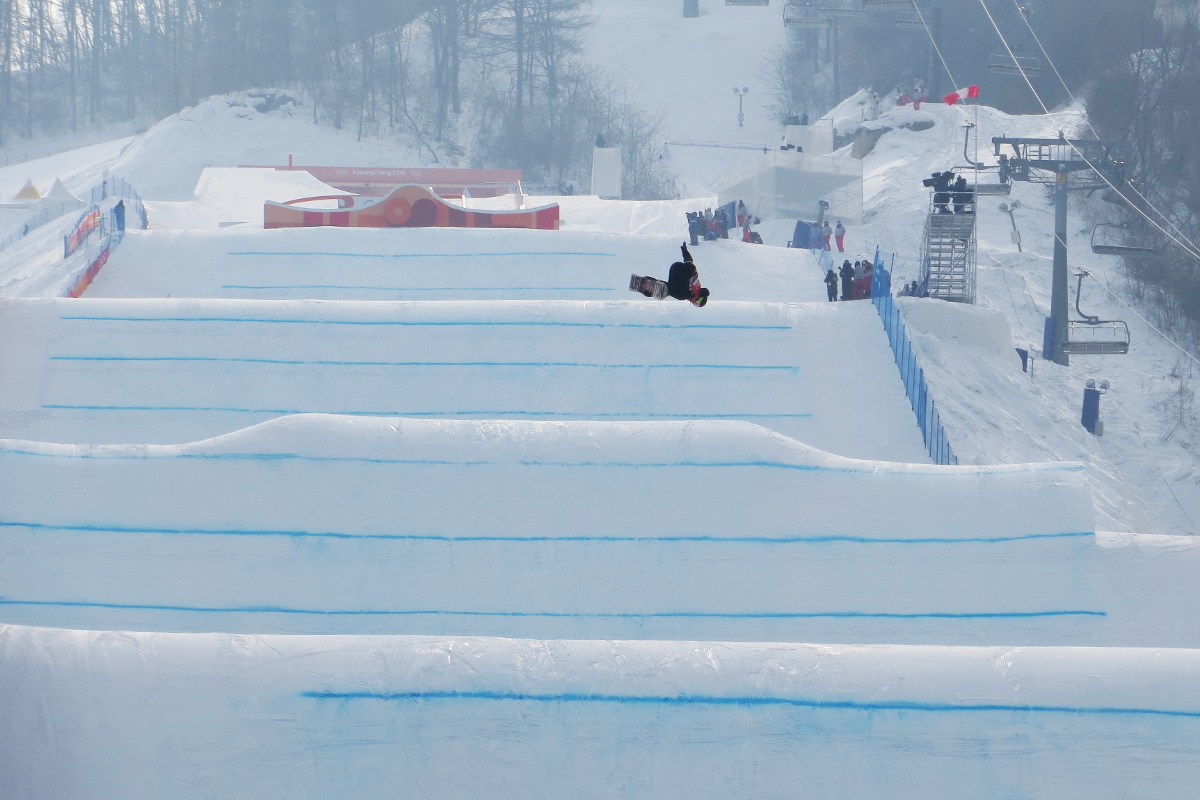 We knew nothing about slopestyle. Hehe. The athletes did a ton of different jumps. My favourites were:

It was very exciting and super fun that there were 4 Canadians in the event. It was cold, for sure, but I think it was colder on other days of the games.

We were also able to watch moguls training happening at the same time. From our seats, we could see the moguls and aerials course. 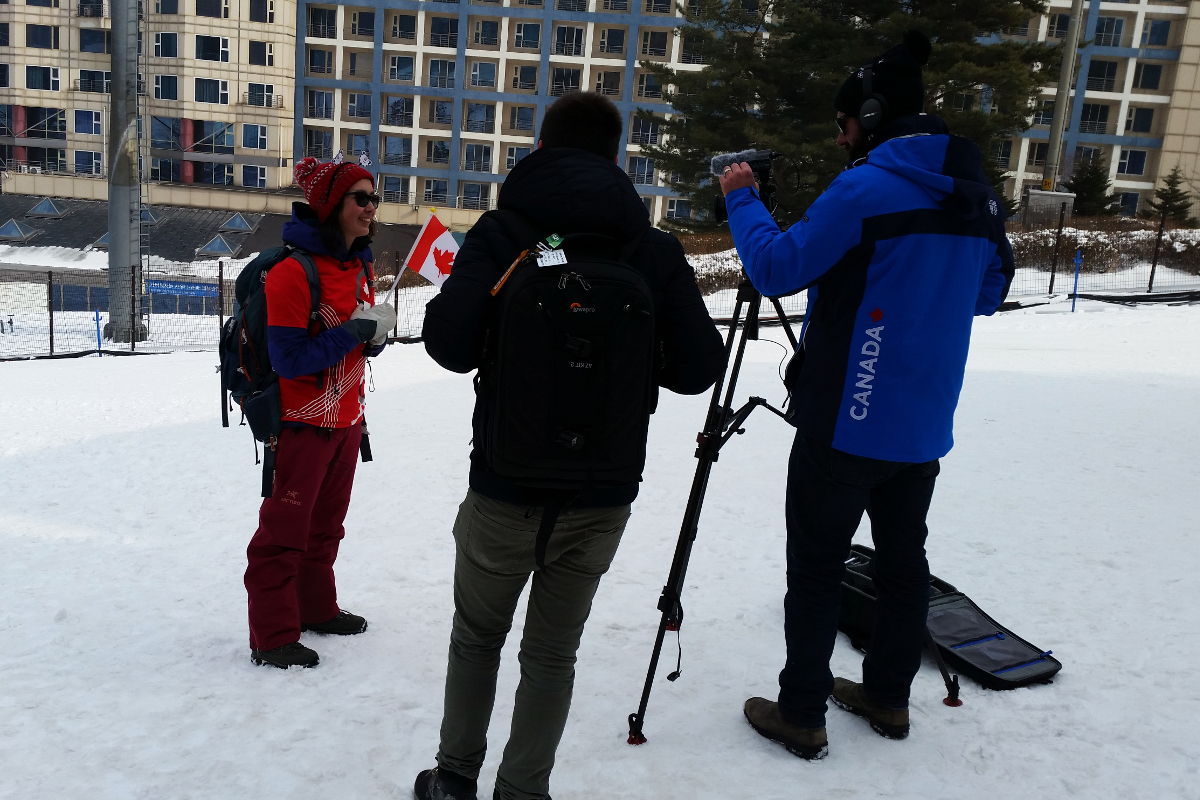 There were two CBC reporters at the event who took a bunch of photos of us. Katrina made it in a gif! I was interviewed for a Valentines Day segment, but didn’t make it in the final cut. 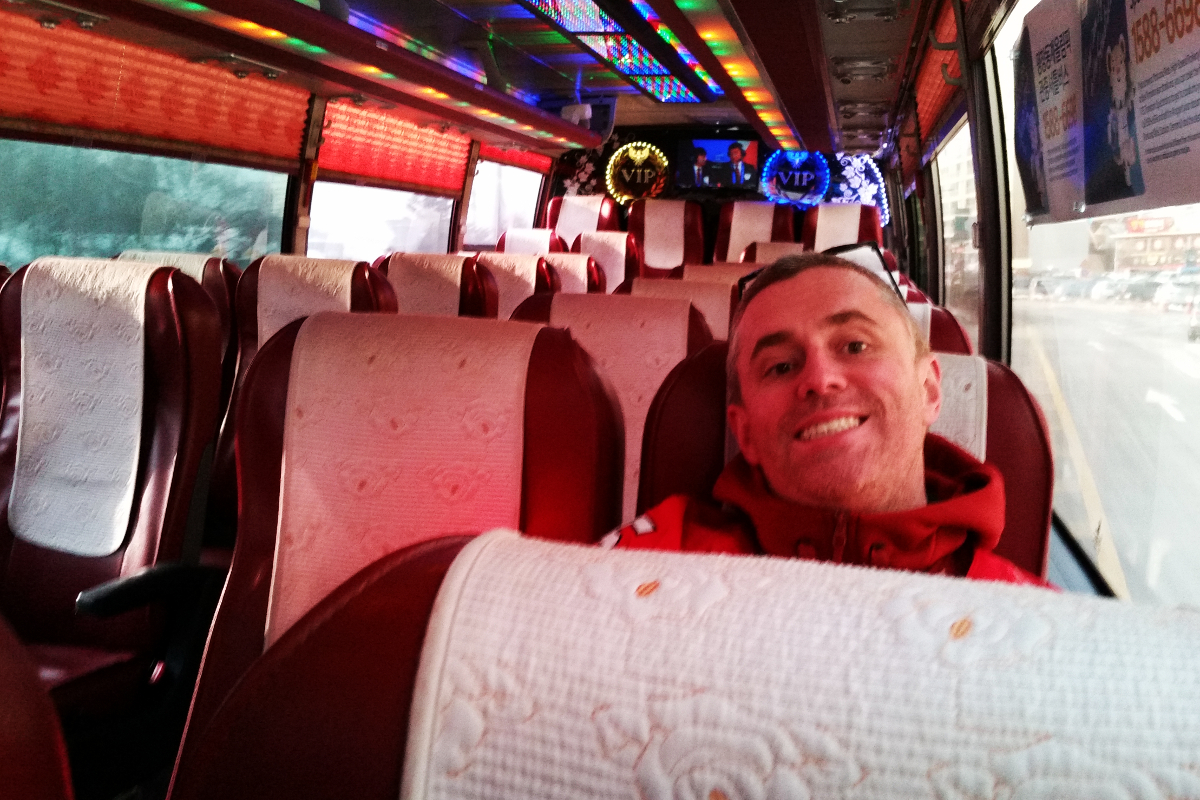 Getting back to Seoul was easy. We even had our own private shuttle (where did everyone go?) 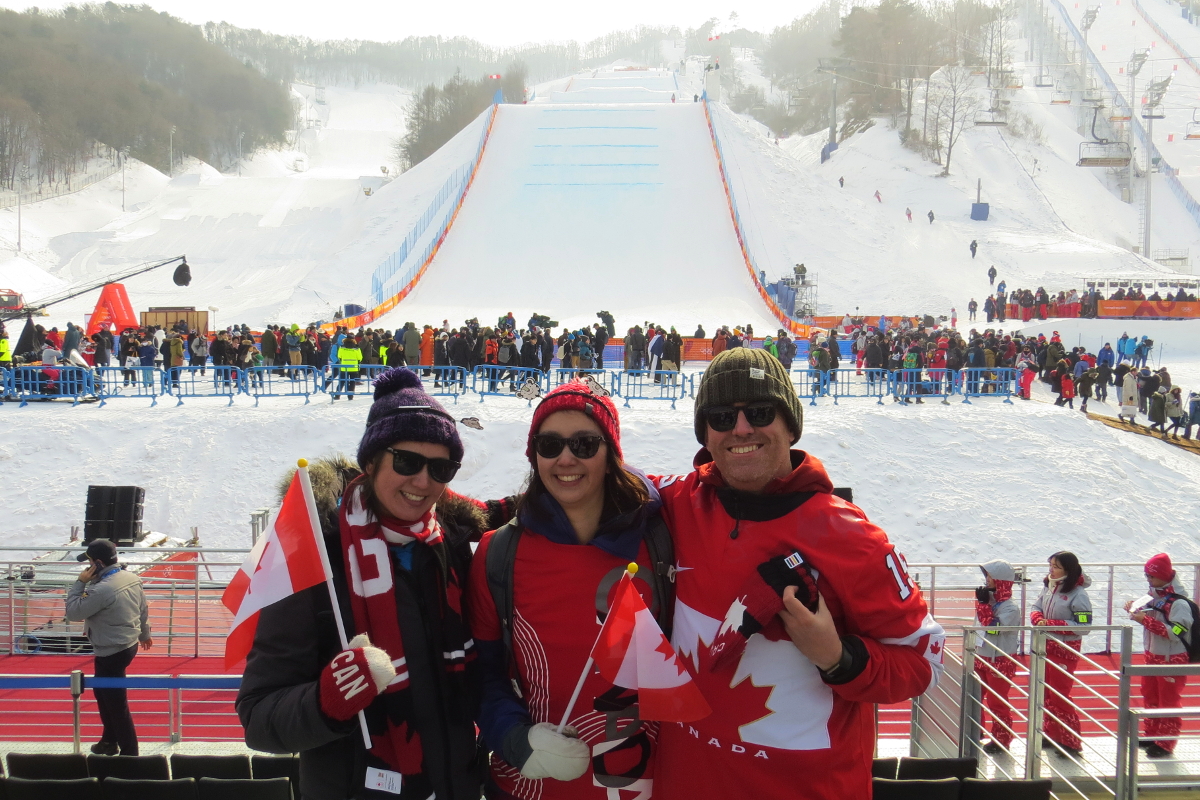 We are pretty much slopestyle experts now. Also, I am Mark McMorris’ #1 fan. 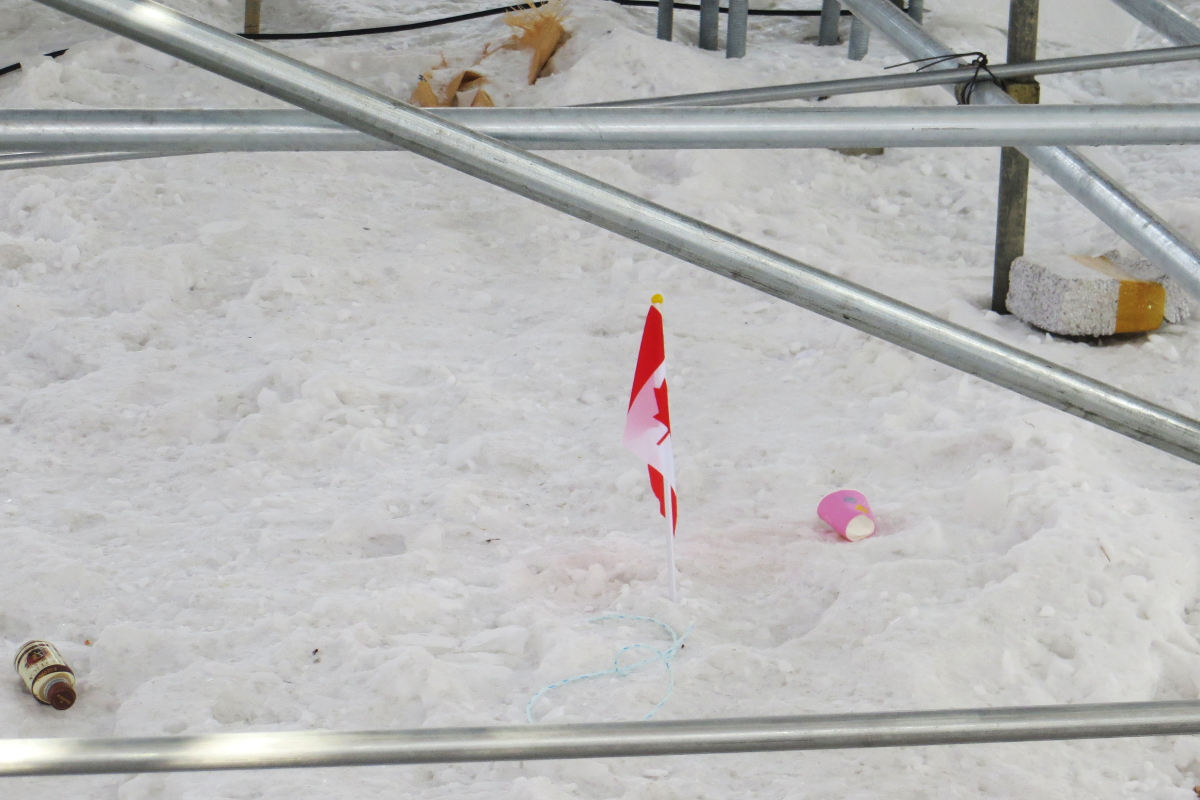 PS Scott dropped his flag while cheering and claimed the area under the bleachers as Canadian territory. 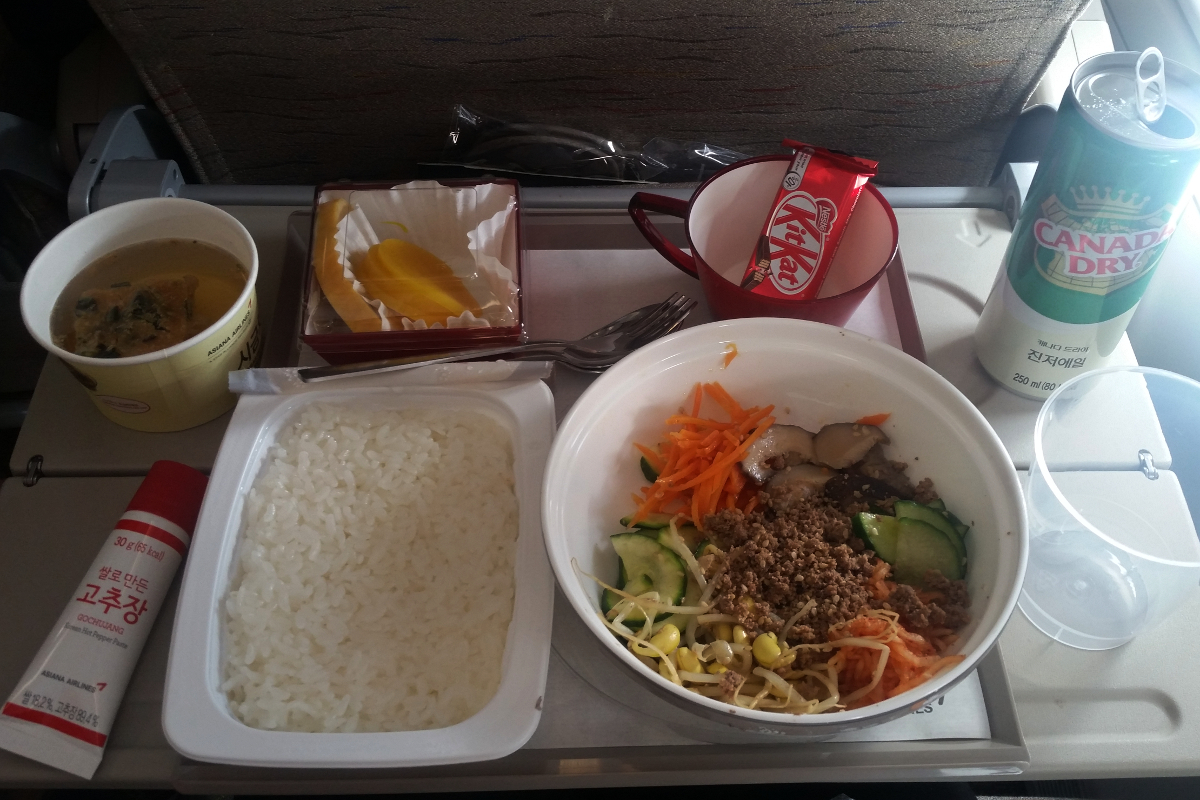 Is this not the best looking airplane meal you have ever seen? I mean, bibimbap with plenty of vegetables, Kit Kat, Canada Dry, a lil’ tube of gochujang?? Amazing.

Scott and I had one day in Seoul before Rosemarie arrived. She’s been getting plenty of nakey spa time in Japan so we decided that was a good activity for us to do before she got there. We went to Dragon Hill Spa, thanks to Leslie’s informative blog post about jjimjilbangs. The weirdest part was having to strip naked in the change room, then walk past the (fully dressed) ladies selling eggs at the snack counter and head down the stairs to the floor with the pools. Once I got to that area I was fine, but I felt really weird walking around nude when people were still arriving in their winter coats. 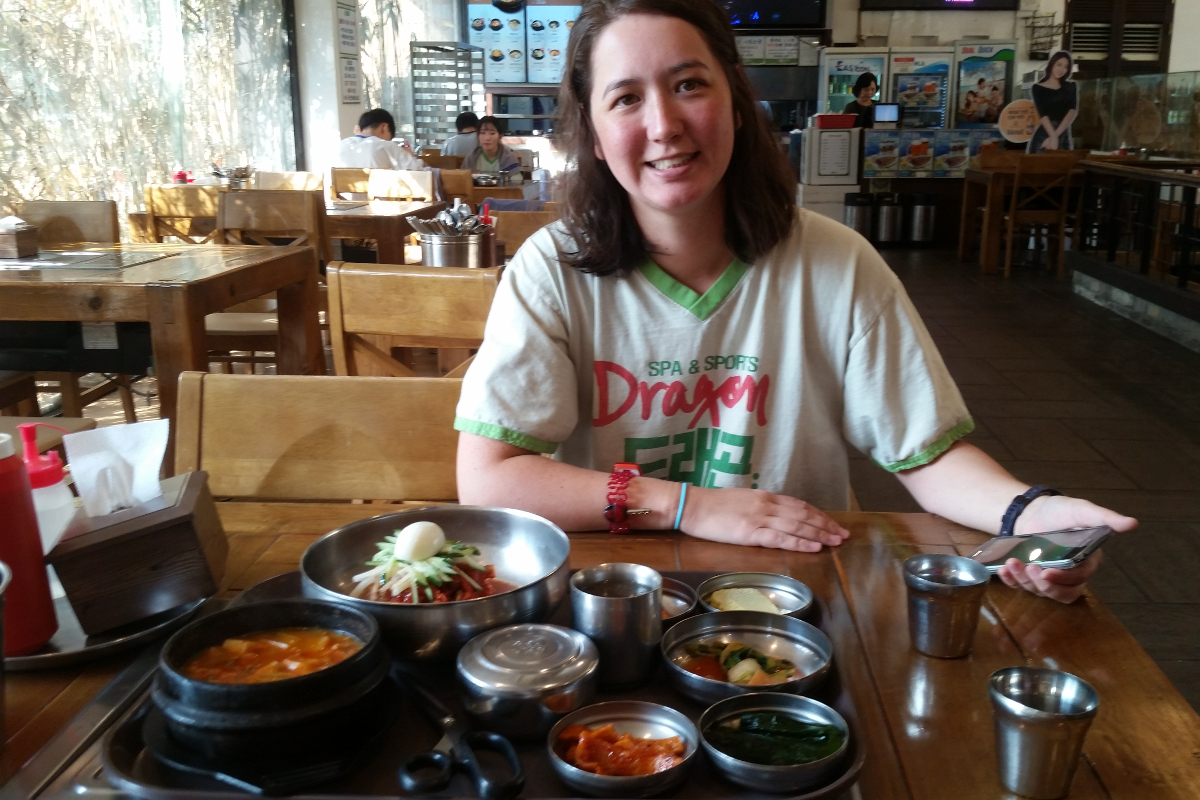 Anyway they have separate bath areas for men and women so Scott and I each went for a soak and met up for lunch later in the spa restaurant. I liked the medium temperature pools the most, and the herbal pools and the cold pool with the ultra strong jets. The full body jet pool was broken which was a shame because I think it would have been my favourite. I got a body scrub, which was odd, but my skin felt so nice and soft afterwards, and Scott got a massage. 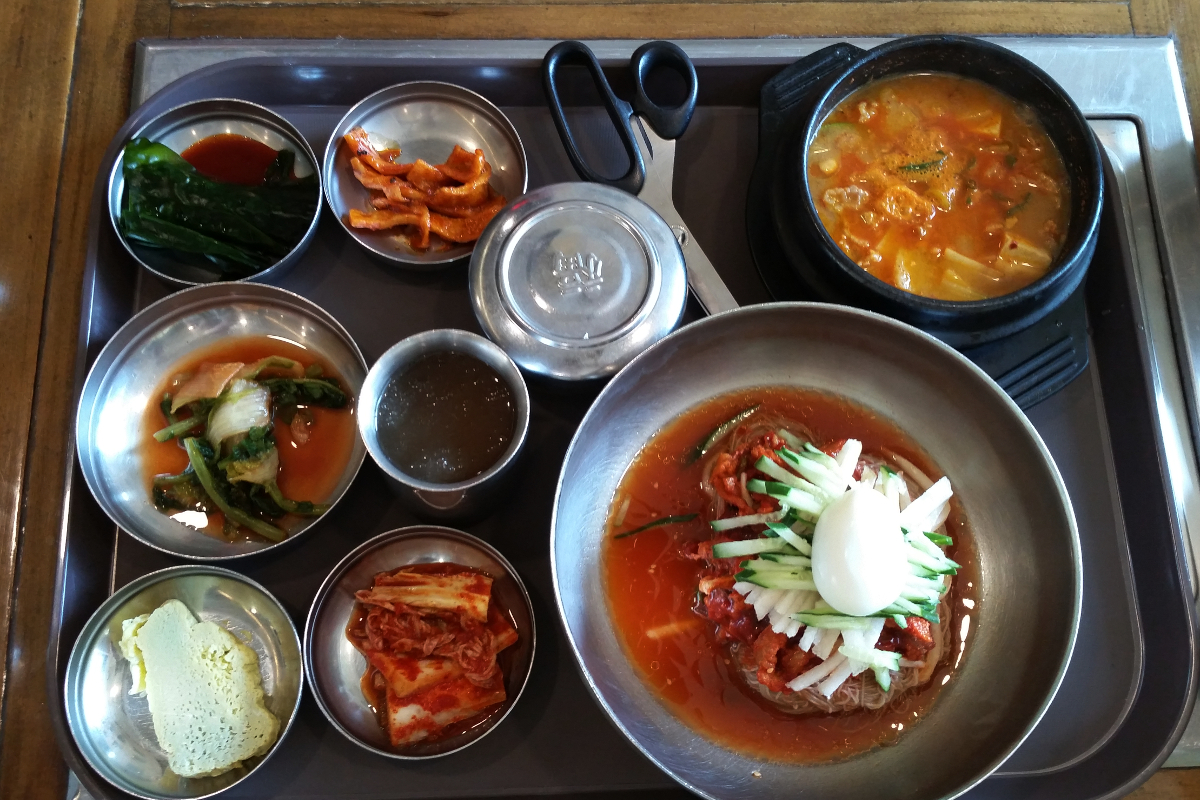 Spa lunch. We had kimchi stew and cold noodles with pollack. The noodles were soooo long you have to chop them up with scissors so you don’t choke, and the fish was super chewy because it is repeatedly frozen and dried (like 20 times!!) until all the cells explode. I probably would have enjoyed it more if I had known why the fish was so chewy before I ate it. 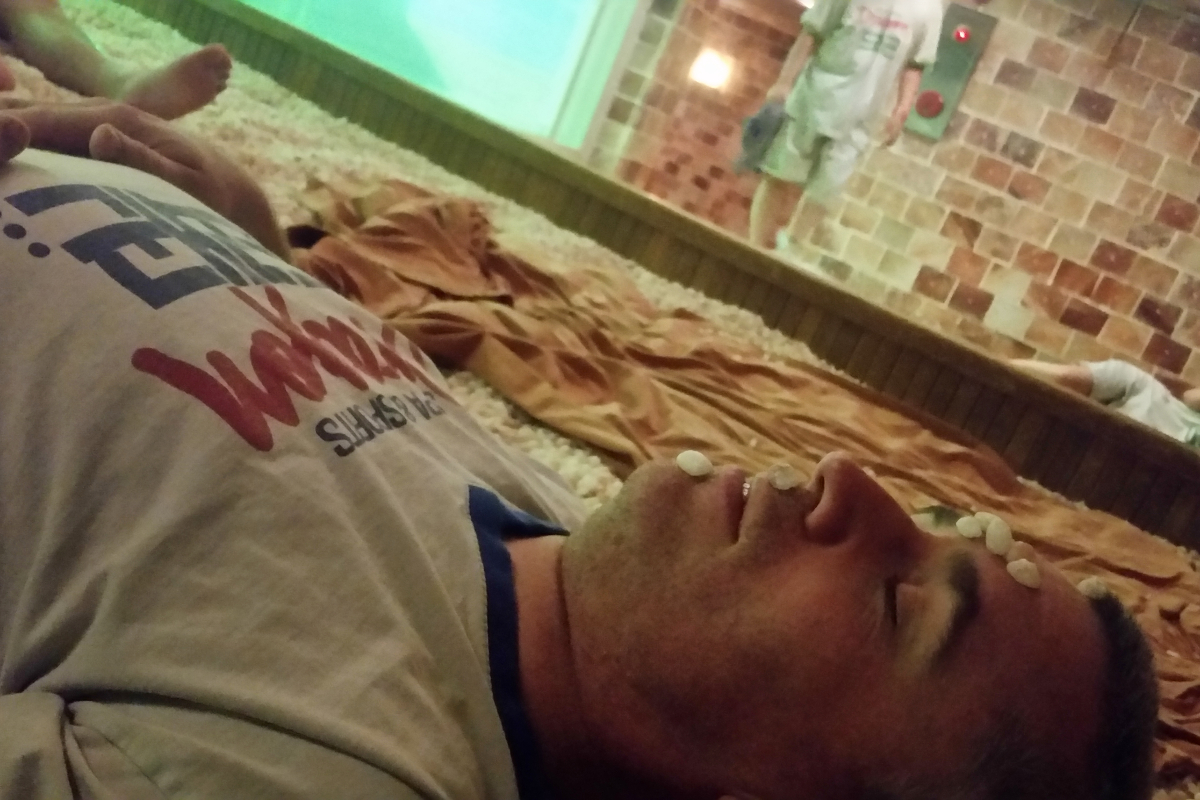 We also tried out the dry saunas in the common area. Some of them were SO FREAKING HOT and you had to crawl through a tiny door to get in, haha. 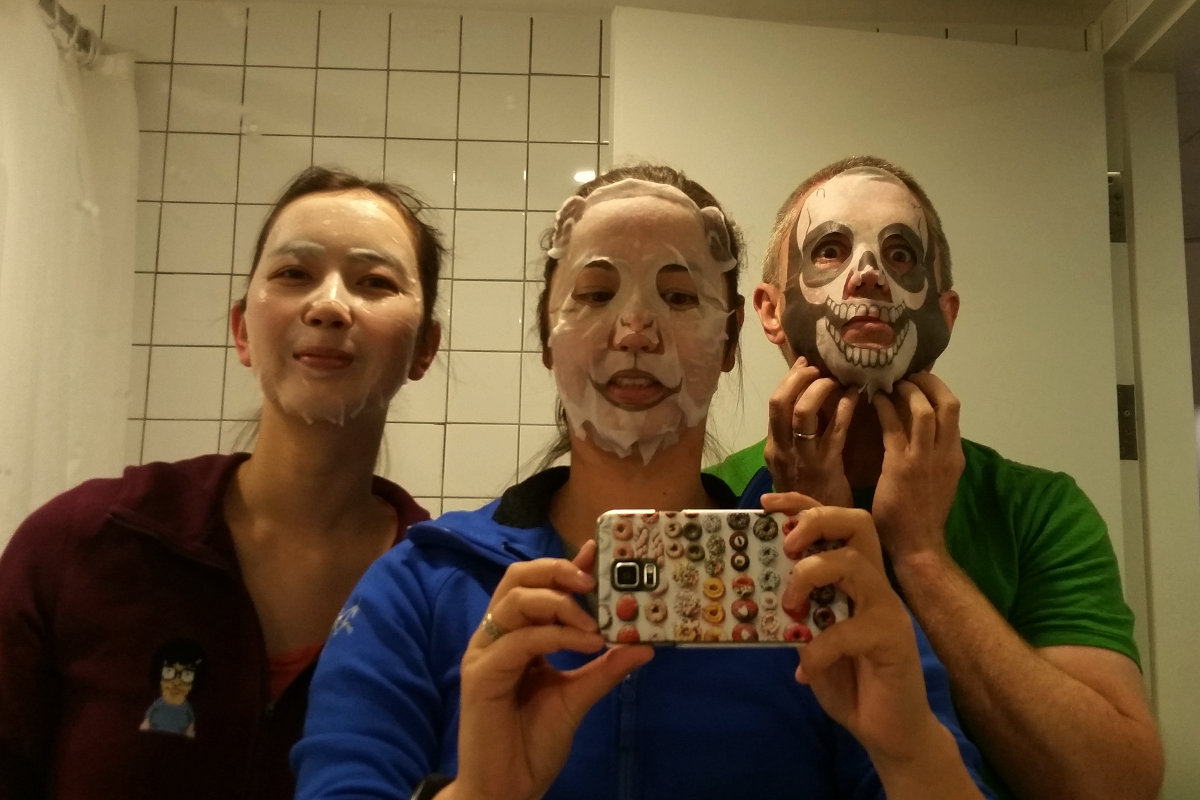 Rosemarie arrives!! We apply Korean sheet masks and trade gifts (Tina hoodie and Tim Tams for her, kawaiiiiiii treats for us).

The next day we went to approximately 900 different places around Seoul thanks to Jinnie and Leslie’s and many other people’s AWESOME recommendations. I’ll just post a few highlights. 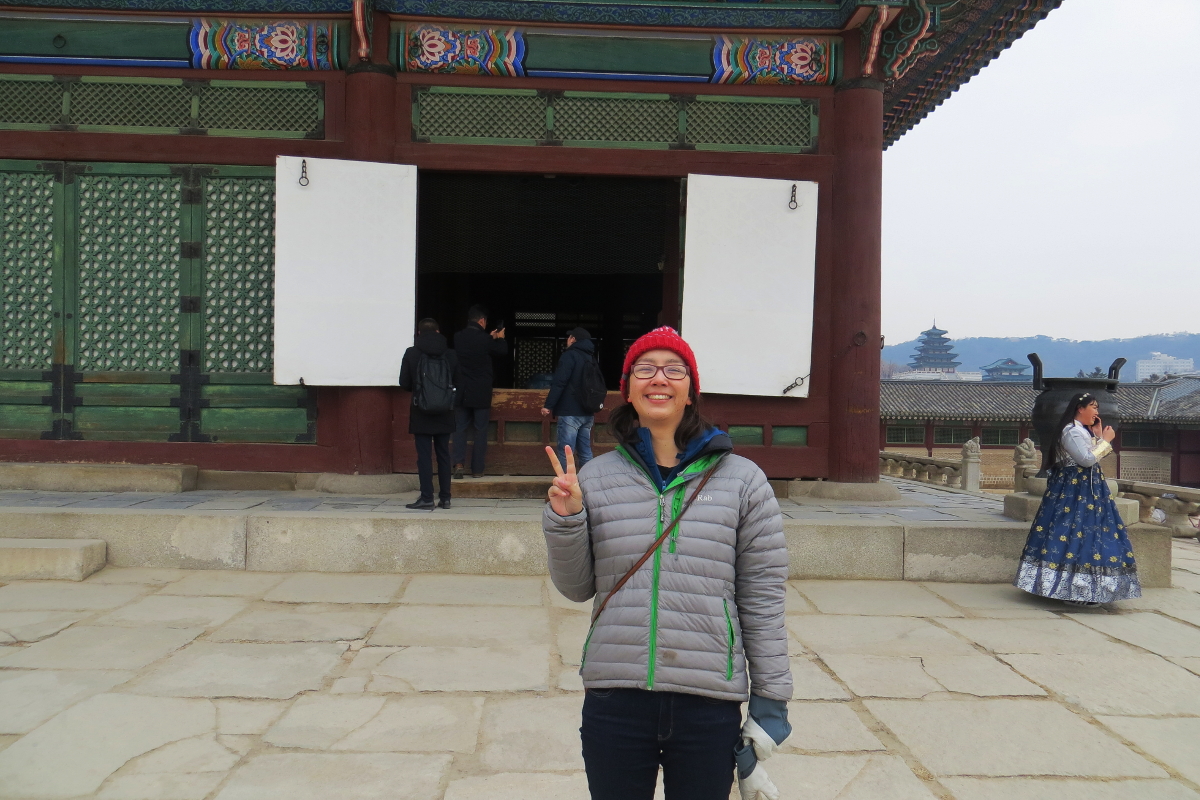 Temple… ✔. Missed the changing of the guard and regretted not renting hanboks, rah. 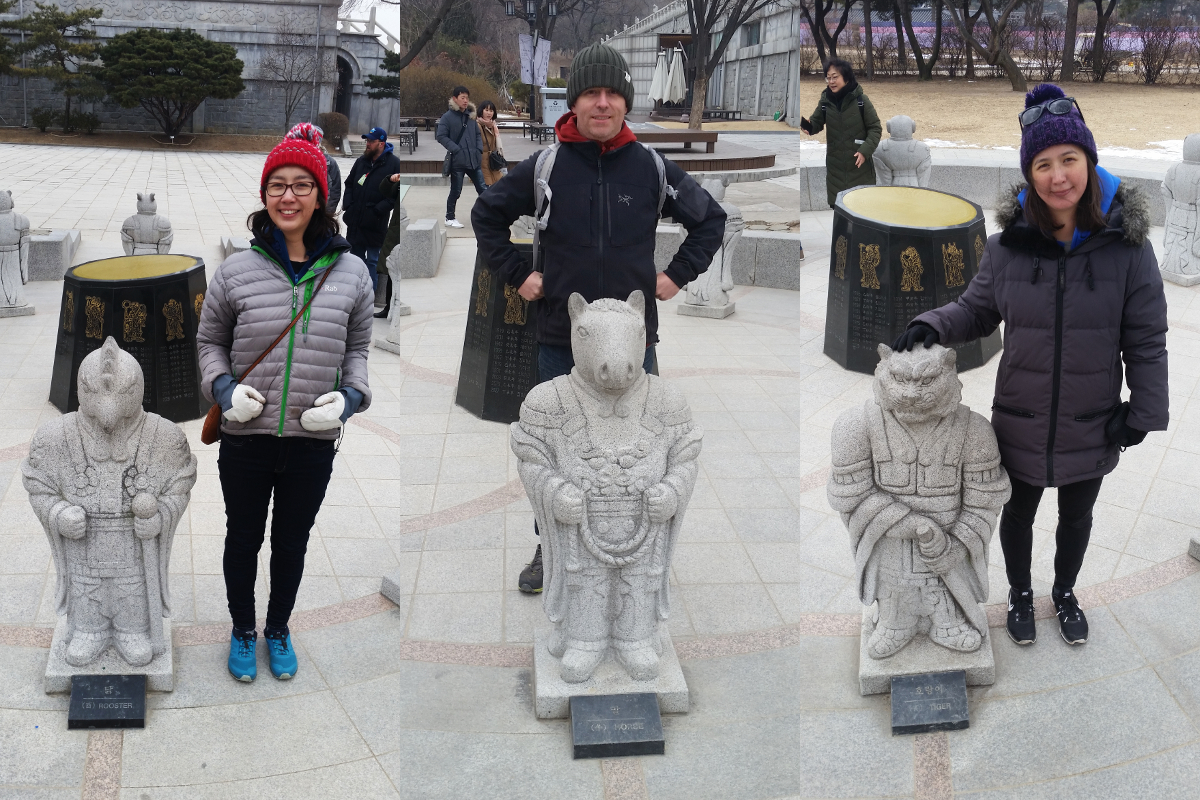 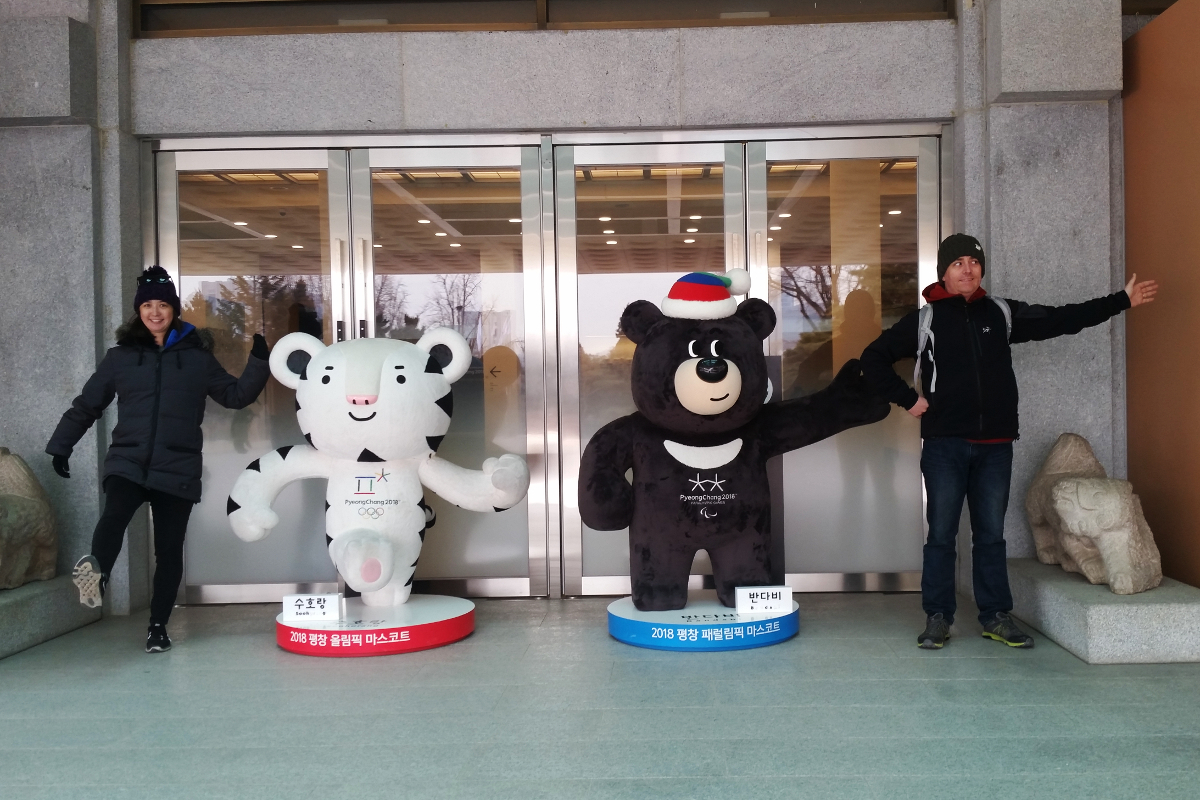 Good job Scott even getting the eyes right. :D A brief stop at the National Folk Museum. 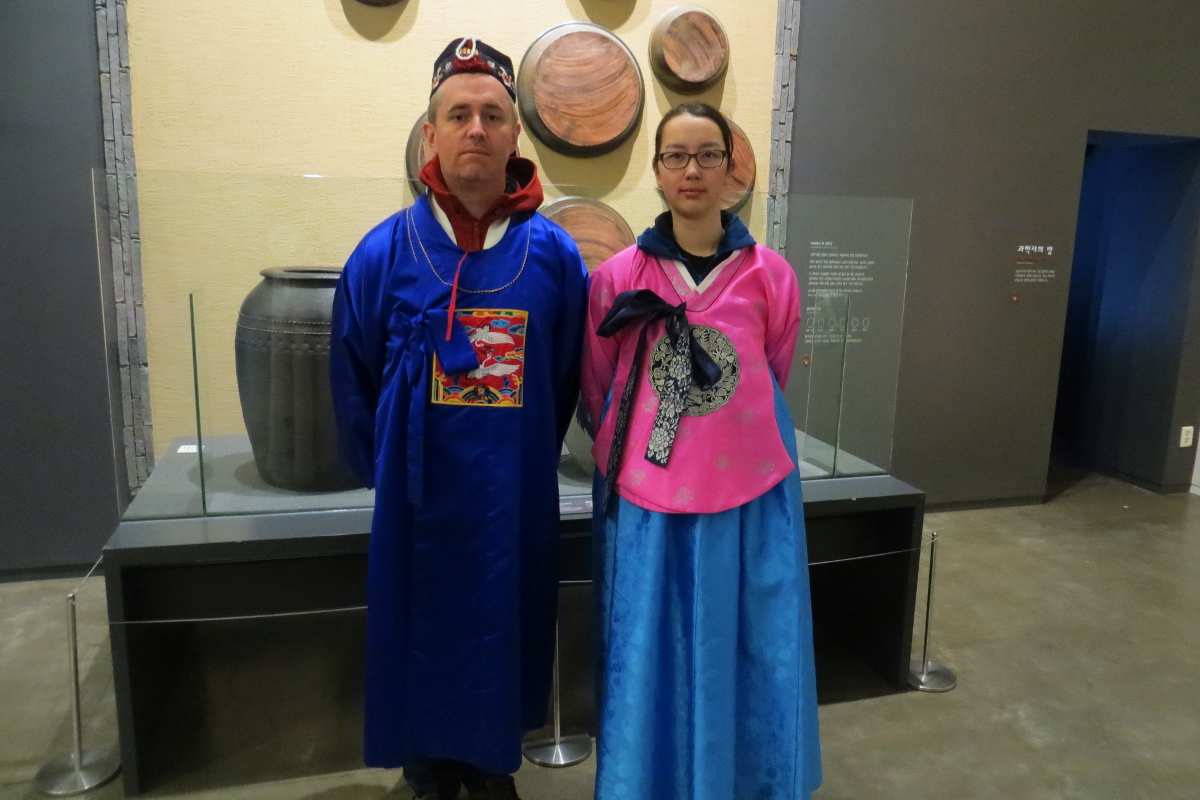 Woohoo, second chance hanboks!! The Kimchi Museum had some that you could try on, so of course we took advantage and wore them the whole time at the museum. :) 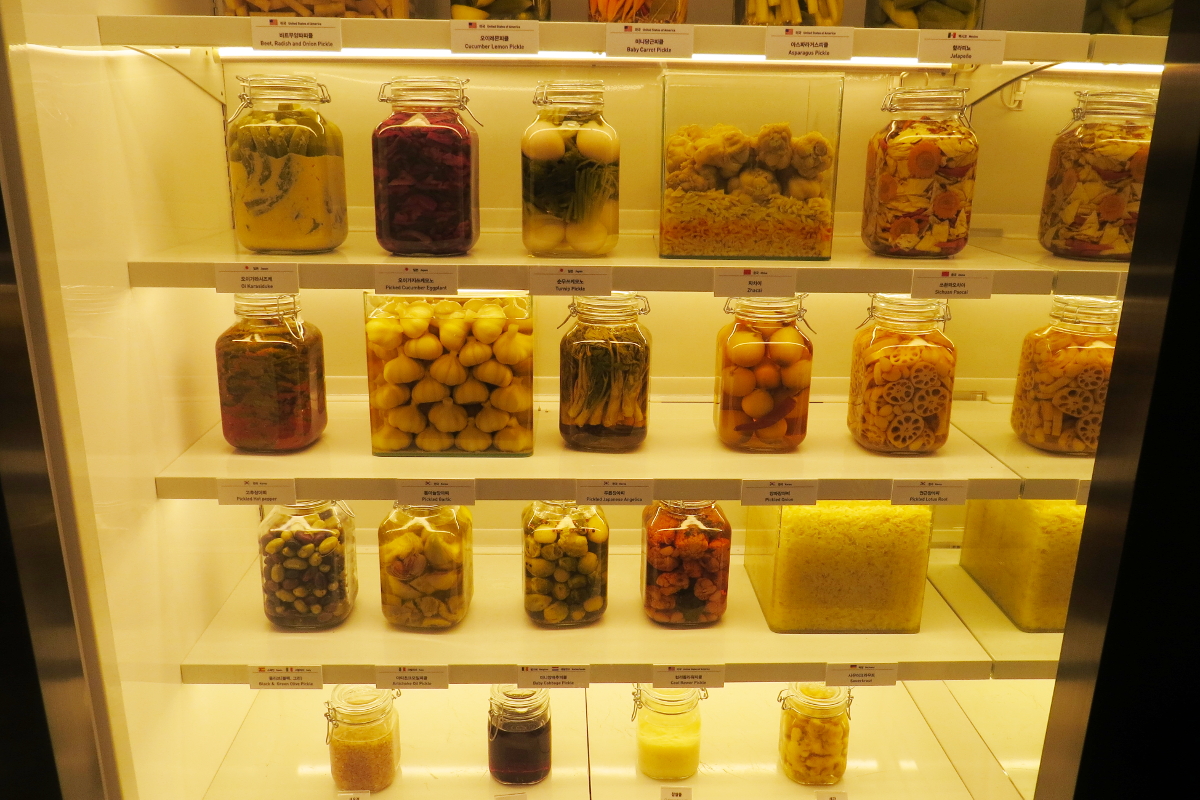 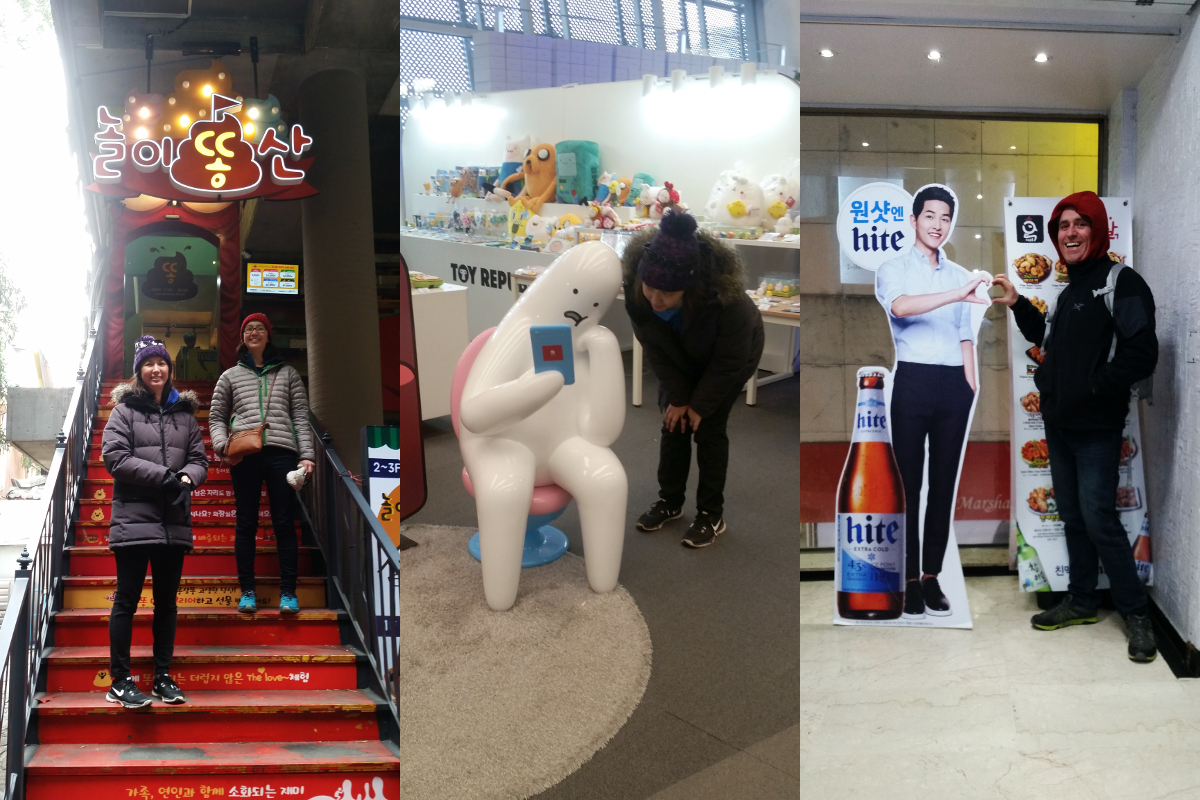 Me and Ross at the poop fun centre (???)(didn’t actually pay to go in), Me and Mr. Donothing (my new spirit animal), Scott and his drinking buddy being #basic. 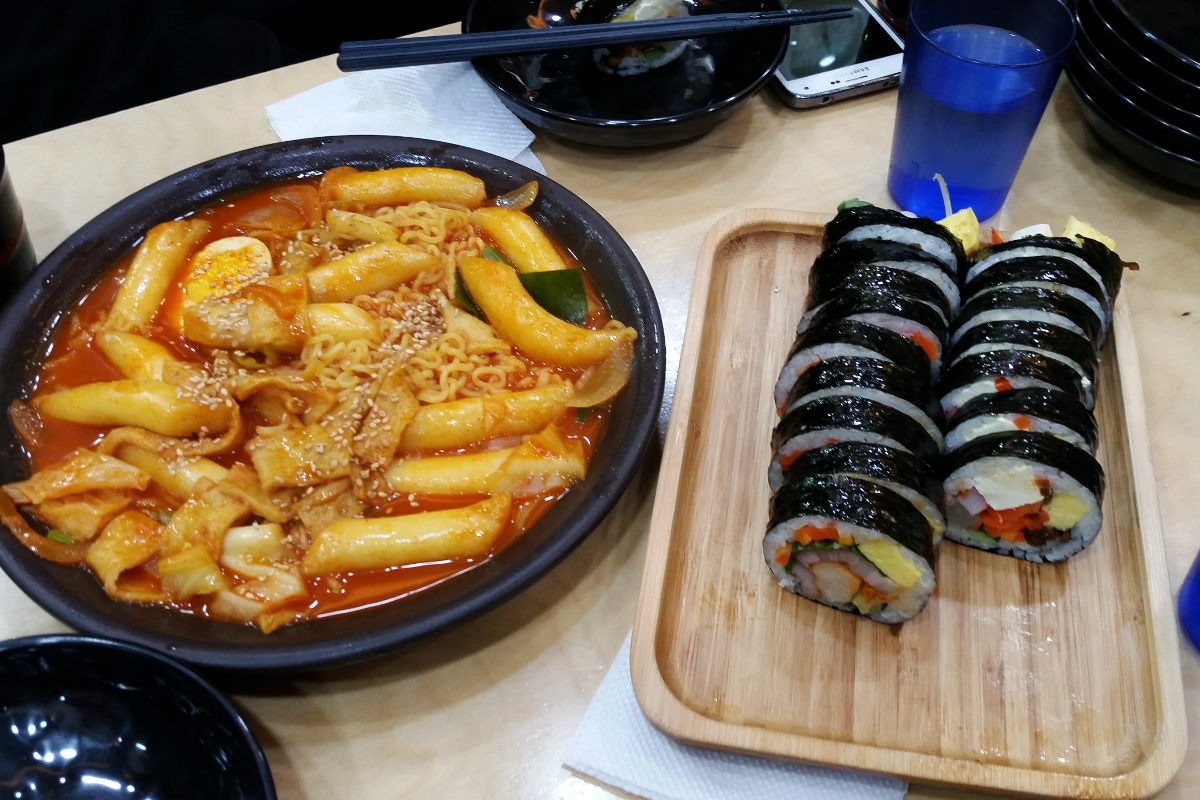 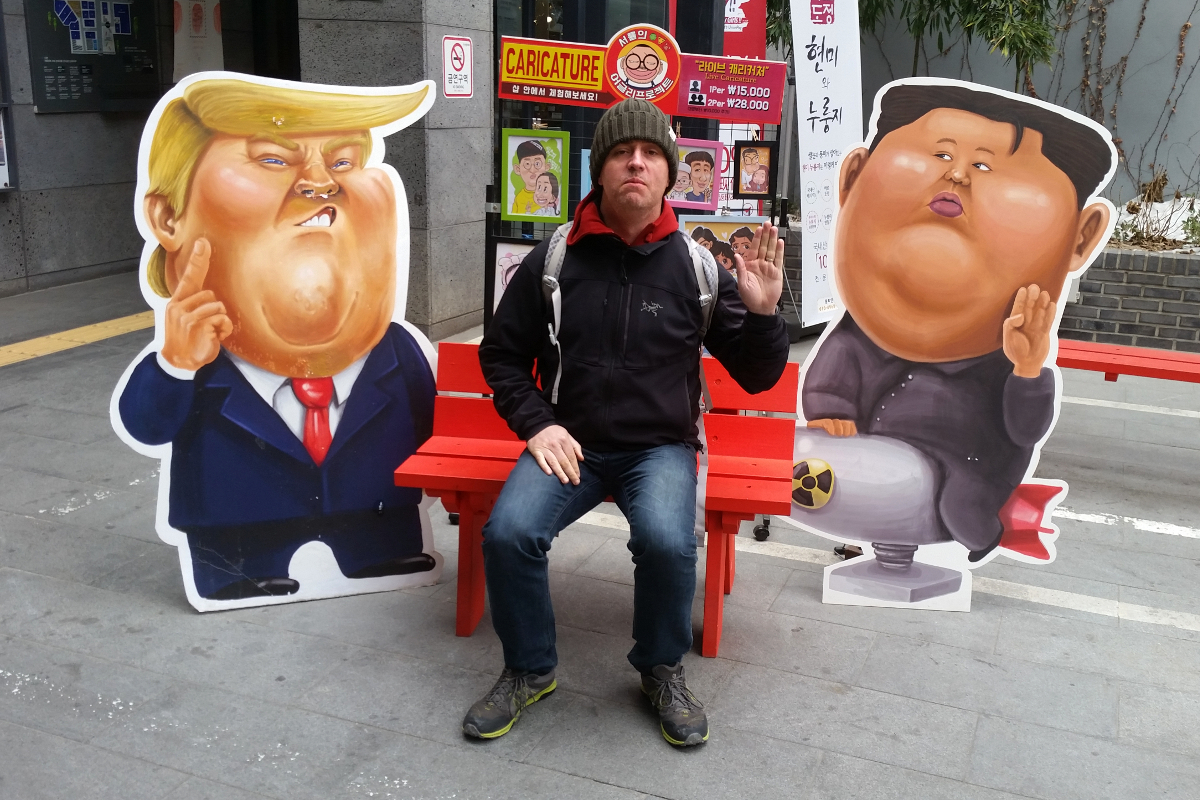 This is the only thing we saw on the whole trip about North Korea. Scott’s dad wanted a North Korean Olympic Team t-shirt but we couldn’t find anything like that at all! I suppose it’s not a joking matter. 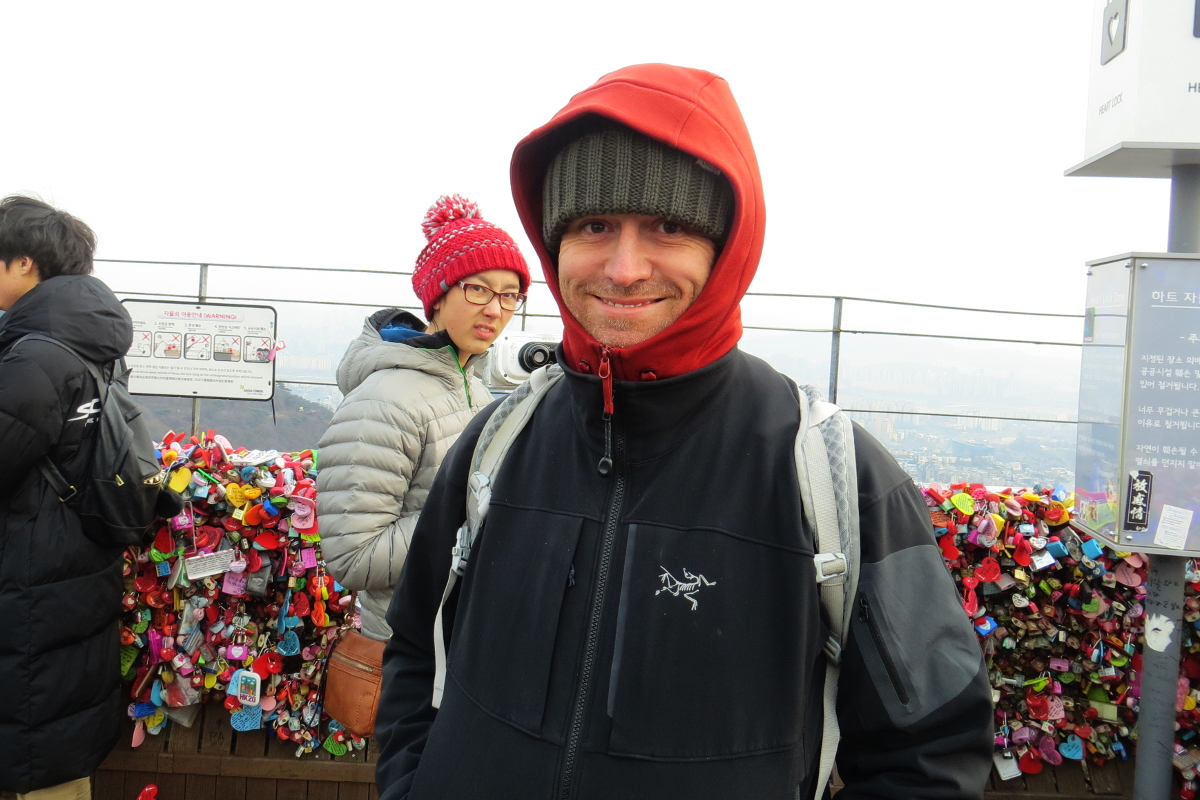 At S Namsan Tower. Check out all those love locks! 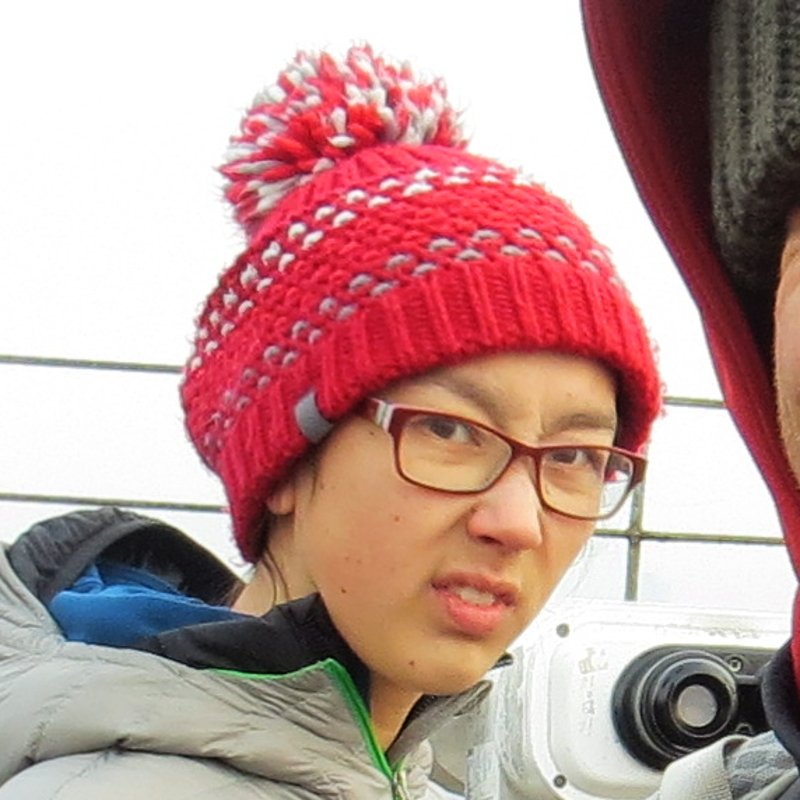 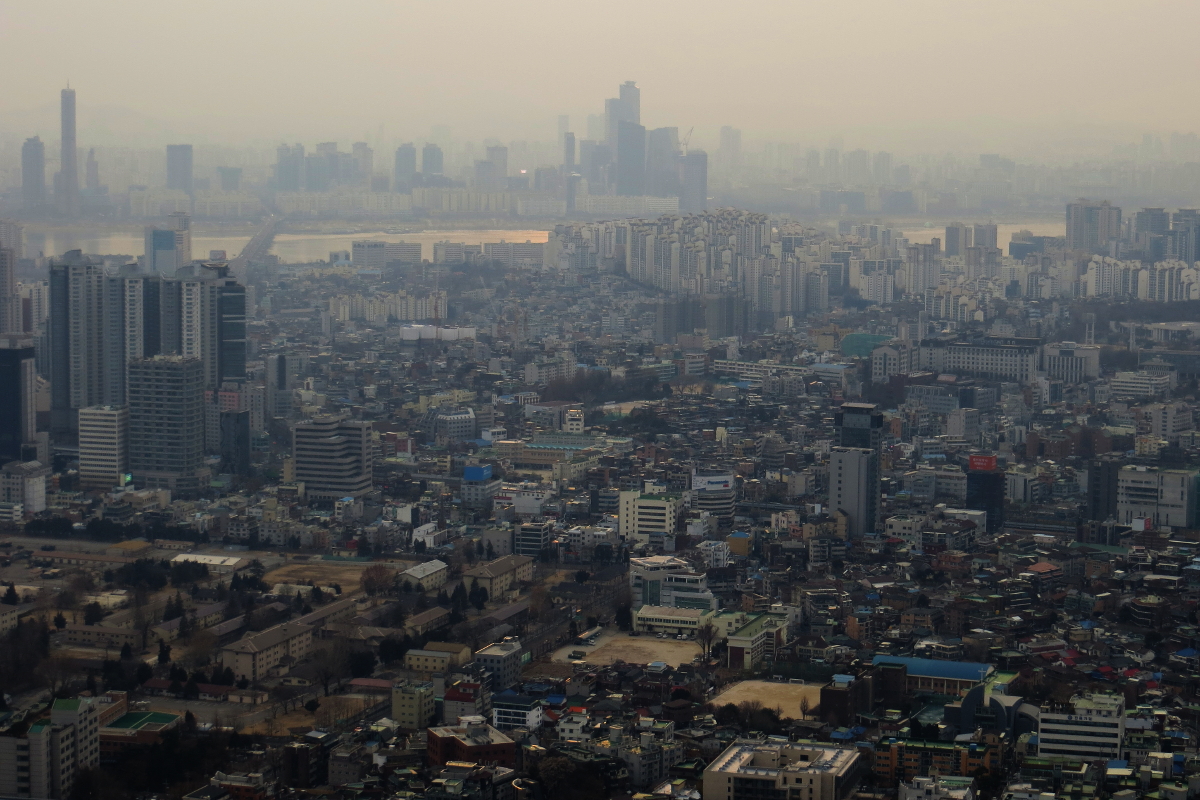 We didn’t go up the actual tower because the views from the top of the hill were already pretty great. Seoul is huge!! Check out that apartment density near the river!! This is the South view. 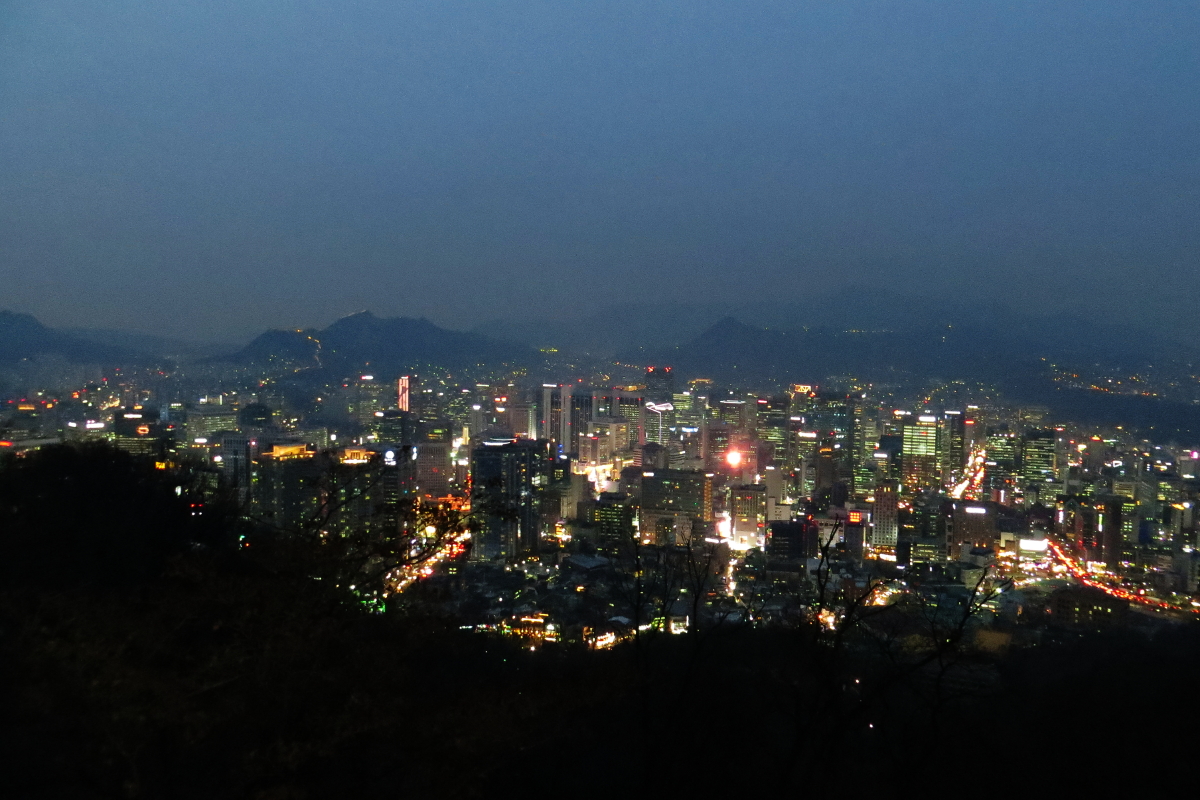 We stayed until sunset so we could see the twinkling city. North view!

We also did a brief tour of the printer and toner district of Seoul, a little shopping, ate BBQ, and let Rose win a game of Seven Wonders ;). BIG DAY!!