Today was a good day of work. My patients were mostly young and easy to deal with. I wrote down my first D’s (for DID, instead of WATCHED or HELPED) in my daily log. I feel a bit behind compared to my classmates, but I think it’s because the camera I am on sees so much variety… it is pretty hard to get to the D level when I see the same scans so sporadically, unlike on some of the other cameras where they just do heart scans non-stop. I’m sure it will even out over the span of the summer.

I painted my nails on the weekend with Rosemarie. 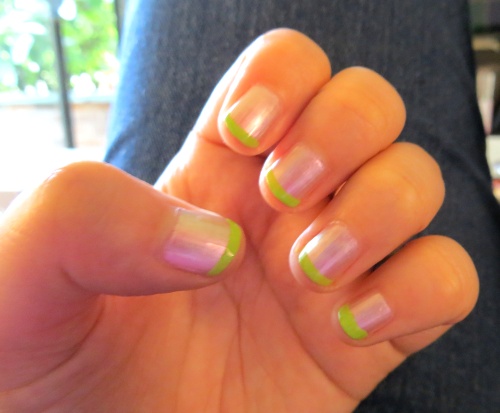 We were experimenting with my new nails painting stickers that I bought off Ebay for cheap. I’ll try it again sometime and show you how they work.

Scott was supposed to come home tomorrow, but things went wrong at his work and now he’s stuck in Edmonton until the end of the week. :( I don’t mind being alone, but he’s been gone for a long time.