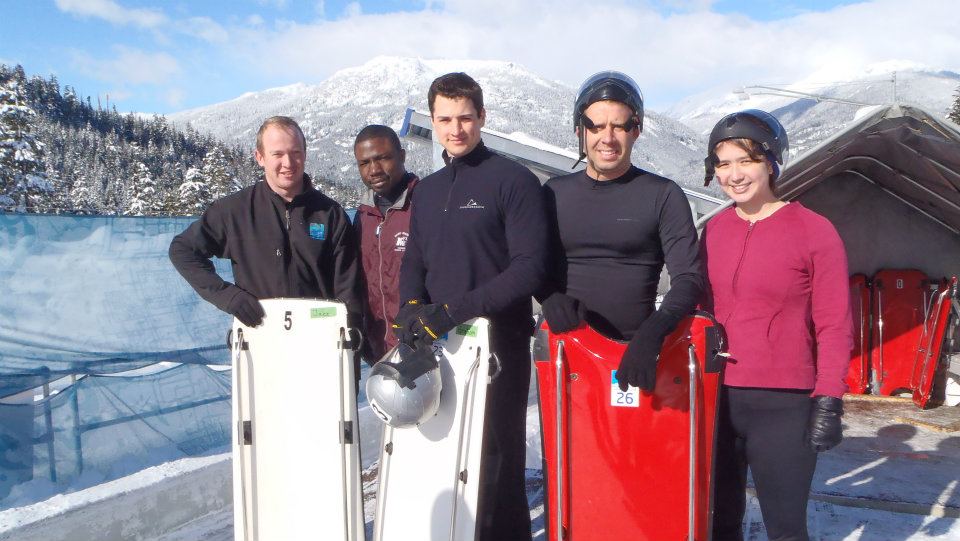 My second day of skeleton was really awesome. I woke up pumped and ready for another session. My first four runs I got 99.72, 99.58, 98.99, 99.42 km/hr. Frustrating. That 98.99 km/hr run was when my coach pushed me straight into the wall at the very top. I heard him yell ‘OH NO!!’ as I disappeared around the first corner. I recovered from the bump though, luckily. Sometimes in skeleton you hit an edge near the beginning of the run and end up bashing back and forth the whole way down. They usually get a speed in the 80’s or low 90’s at the speed trap. Luckily I have not had a run like that yet!

Anyway after the fourth run we were told that the next one would be our last. I told myself ‘OK Katrina, you really need to focus and have a perfect run’. The run right before that I thought was pretty good too but I still didn’t get that 100 km/hr that I wanted. I got the other people to help smooth down the back of my sweater, tuck my gloves into my sleeves and I smoothed down my tights on my legs. Coach Ivo gave me a slightly bigger push than before. He really wanted to see me get 100 km/hr too but often giving a bigger push at our level means less control on the way down and a slower speed and time. I relaxed as fully as I could and concentrated on keeping my chin out and my shoulders down and my toes pointed and I made sure to lean into the one corner I sometimes bumped on the way down.

It felt like an awesome smooth run and when they announced my speed at the bottom we all cheered. I was so happy!! 100.60 km/hr and a finish time of less than 30 seconds. A perfect way to end the session. 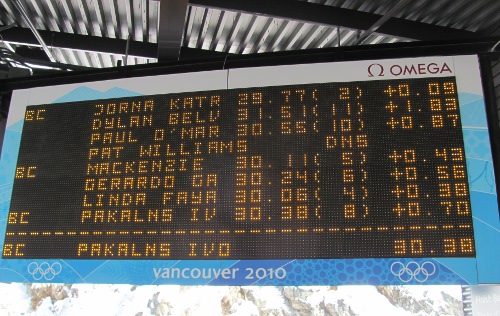 Dang Brian beat me by 0.09 s on my perfect run, so I actually still only came in second. Achieving my personal goal feels really really good though. 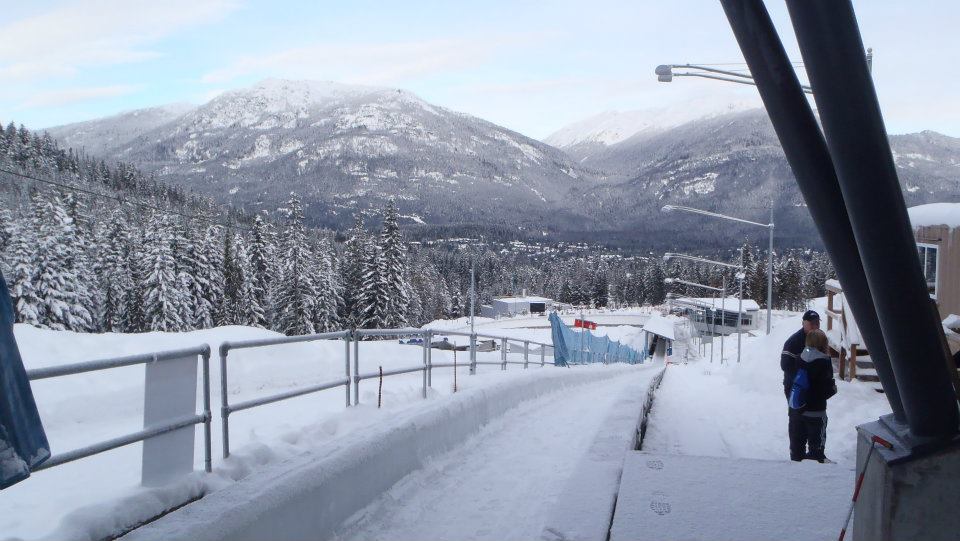 That’s the view from the finishing area. When we do skeleton we only get about half way up and then the crew helps pick up your sled and pass it to you.

Later that day Dylan, Brian and I also got a chance to do a bobsled run! Sometimes you really do just need to ask. Tourists pay a lot of money to do one bobsled run but we got to do it for free. Woohoo. 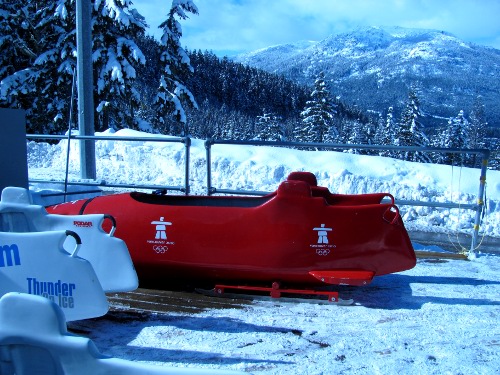 Bobsled was freaking bumpy. My head bounced around all over the place and I couldn’t even hold it up in the last corner. So much force. It was just like a really rough rollercoaster. I like skeleton better. 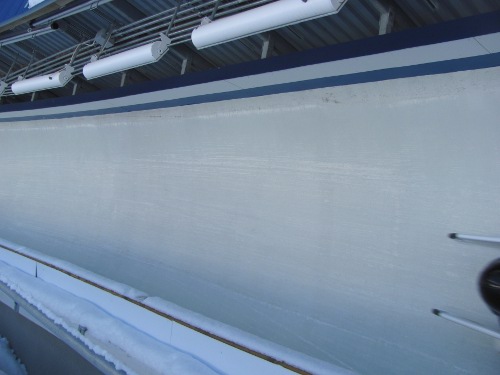 I don’t have any pictures of me doing bobsled because I went at a different time than Dylan and Brian. But I tried to take pictures for them…. and failed. That is the best picture I got, and that’s with Rosemarie’s camera! They were going about 125 km/hr. 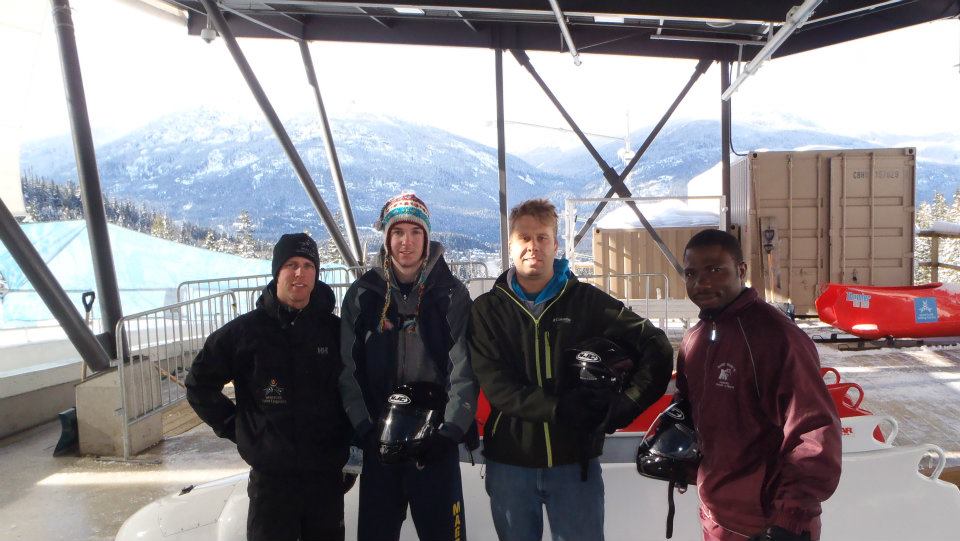 Dylan and Brian after bobsled. The guy on the far left is the one that took me down as well. I guess he’s always trying to get more track hours so he has room to take other sliding association members down before and after tourist sessions. 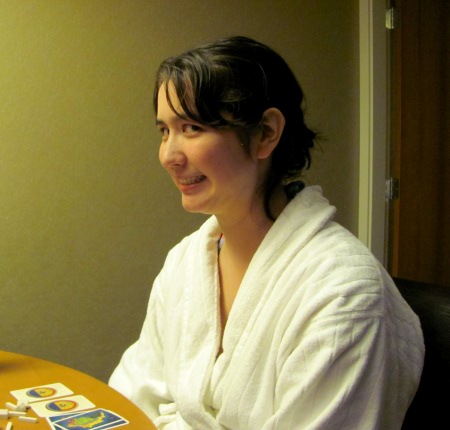 Oh and here is a creepy picture of me in a hotel robe playing Settlers in between hot tub sessions. What a life.

I sure wish I was going again this weekend. Instead I’m going to be studying… a lot! We have three midterms next week again. Then holy cow it’s already March Break. Insane. We have to put in our top three choices for hospital placements this week and soon that will be decided as well. First year… coming along!