This past weekend I did skeleton school up at Whistler. We did 3 two hour sessions, one on Friday night, and on Saturday and Sunday afternoon.

Although the ‘school’ didn’t really have any extra lessons or anything, it was a lot better than the sessions I did last year because coach Ivo talked to us a lot more. He gave us personalized advice and tips. Plus from doing so many runs in a row we were able to learn new things, try them out, and practice. I am now much much better at skeleton. 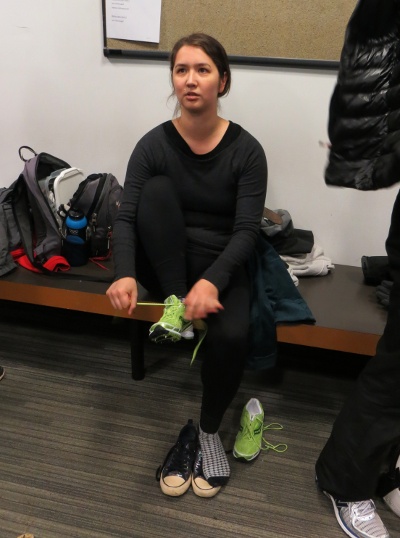 putting on my spikes

We started from Maple Leaf start. That’s about 1/3 of the way up the track, with only 6 corners. This is what a start looks like from there: 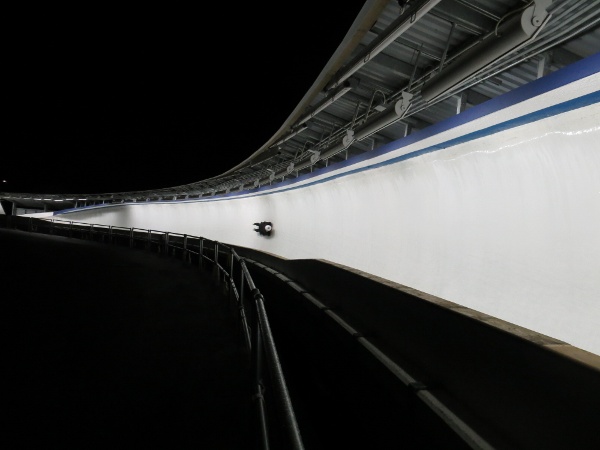 It was actually pretty weird skeleton-ing at night. I found it a lot harder to see, even with all those bright lights shining on the track.

I did pretty mediocre on the first day. Didn’t quite find the best sled for me and ended up with below average results. My fastest speed was 95.40 km/hr. Quite a few bumps and ping pongs.

It was POURING rain. I worried that the rain was going to make the track slower (warmer weather makes the track slower) but we actually ended up with slightly faster times. My fastest speed recorded was 99.7 km/hr. Two of our runs didn’t get printed this day though. I don’t think I broke 100 km/hr on day 2, but I was okay with it because I was trying out a lot of new things.

Coach finally started teaching us really how to steer. We needed to be able to steer if we would move up starting positions. Especially on the last two corners. I tested out all the new techniques and finally found a couple sleds that worked for me. I stopped hitting the sides in the straightaway section at the end of the track. This was a major achievement.

I felt really really good and comfortable on the track, even with all the rain. I was focused and able to keep position a lot easier than before. I also knew all the corners very well and what would be happening next and what I needed to do.

At the end of Day 2, coach told us that we would be moving up the next day. WE WERE TERRIFIED!!! Brian and I both didn’t sleep very well. 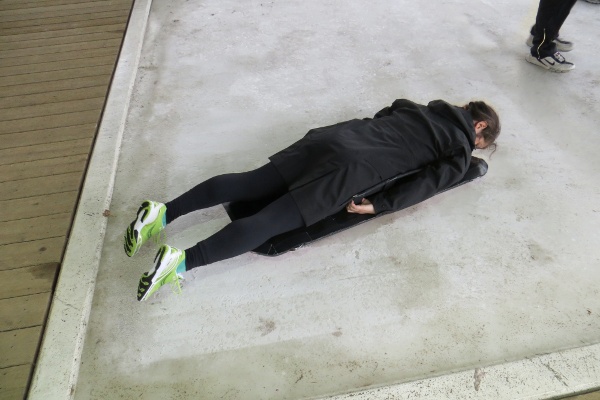 This is a funny picture because it looks like I’m planking. I was actually practising steering. You steer by doing pretty subtle movements with your shoulders and knees. I am looking down because I can see the runners on the sled flex with the pressure I am putting on the different parts of the sled. 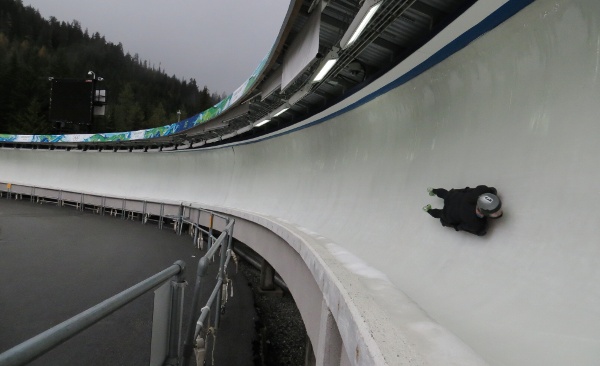 We didn’t actually end up moving up right away. We did 7 more runs from Maple Leaf start where coach watched us all on corner 15 and 16 so he could decide who could move up. I got my fastest Maple Leaf speed ever: 101.05 km/hr.

I got picked, and so did Brian. It was five boys, plus me. I was much less terrified at this point because I had a good sled that I could really control, and had lots of practice by then. I was so so so excited.

Our very last run of the weekend was to be from Junior start. That’s quite near the top. 11 corners! 5 new corners!! I started to get a bit scared again when we had to get into a smaller truck that could bring us up to the top. The road was pretty steep! WE WERE SO HIGH UP!! We knew that by the time we would reach the part of the track where we were normally going very slowly we would already be going ~70 km/hr.

Anyway there wasn’t that much time to dawdle around at the top so before I knew it I was lying face down about to be pushed off from junior start. And there I went!!


It was crazy fast. There was way way more G force on the last corner! I bumped an edge about half way down but other than that I didn’t hit. I didn’t put my feet down at all. It felt like a pretty good run!

I went 115 km/hr!!! I beat all the boys by 6 km/hr. In skeleton-world, that is A LOT to beat them by. It felt good because from Maple Leaf I never seem to be able to beat the physically larger guys. I still haven’t received our official split times sheet on that last run, which sucks because I can’t wait to see all the little (1)’s beside my times!!! 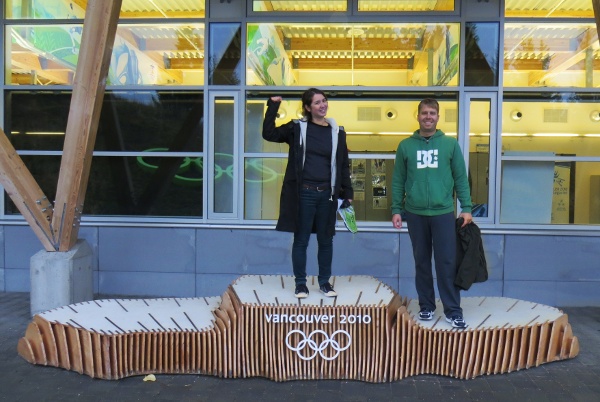 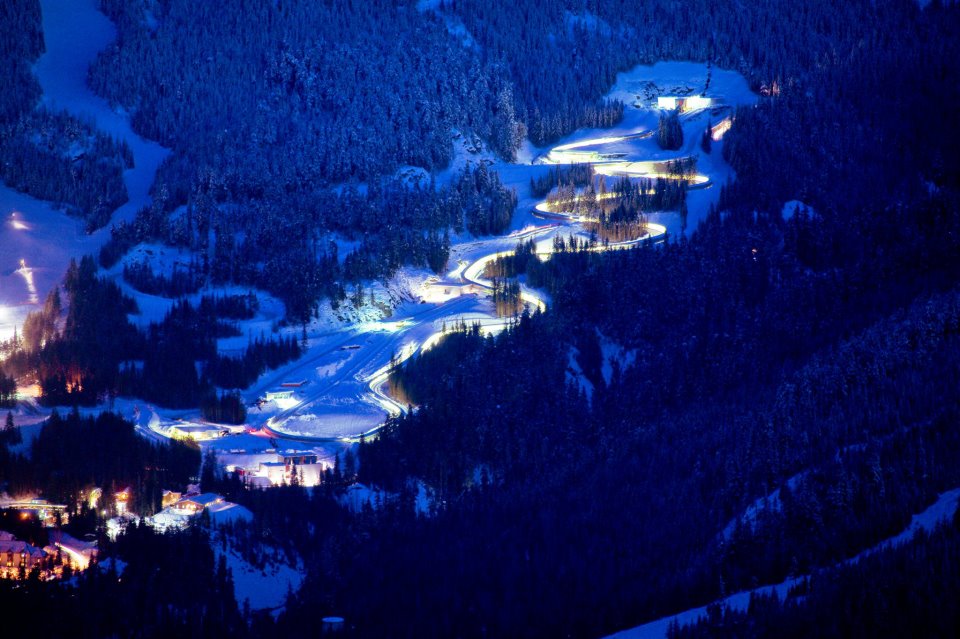 That is clearly not my picture but I thought I’d post it because it looks so cool! 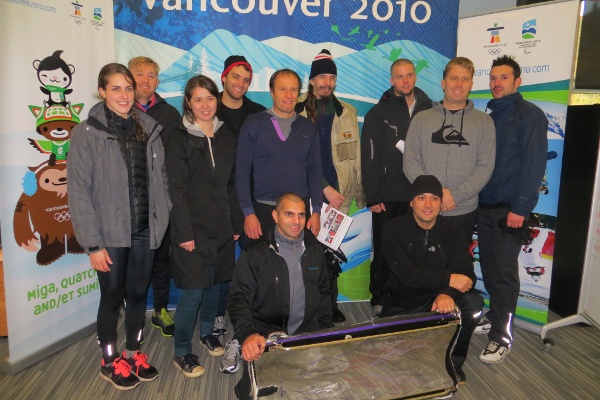 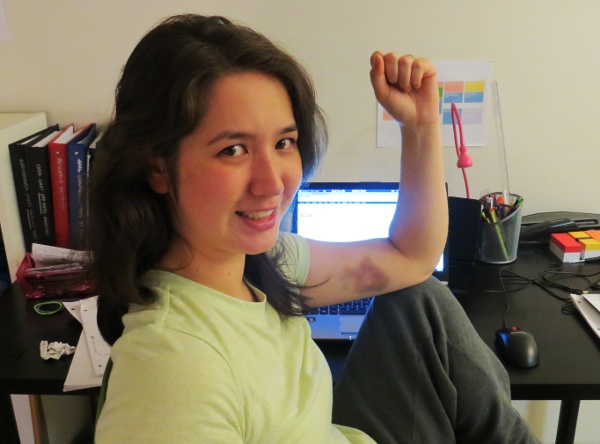 And there’s my worst bruise. From rides on crazy sleds. SLED 26 FOR LIFE NOW.

A huge thank you to Scott for standing out in the rain and taking pictures and videos of us. The pictures are so awesome!!

I had such a great weekend. PERMA-GRIN for sure. I can’t wait to go back. By the way, my goal last year was to go over 100 km/hr, which I achieved. My goal this year was to move up a starting position, and now I’ve already done it!! It’s gonna be a good year!