Thanks to my friend Janine (my old roommate from first year of uni!), Scott and I got free tickets to the Vancouver Fan Expo, and the Canadian Videogame Awards. We just went late in the afternoon, but we still got to see a lot of people in costumes, and it was still quite busy! 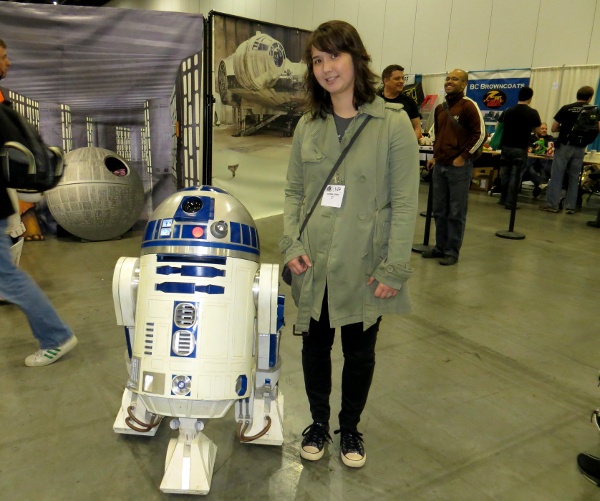 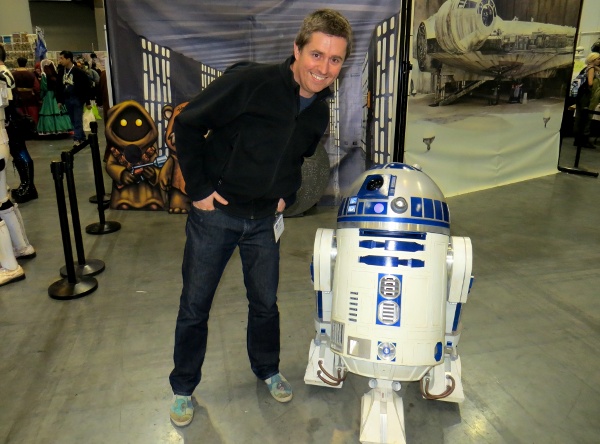 The FanExpo was mostly about comics. But they also had a few things I recognized, like good ol’ R2D2. 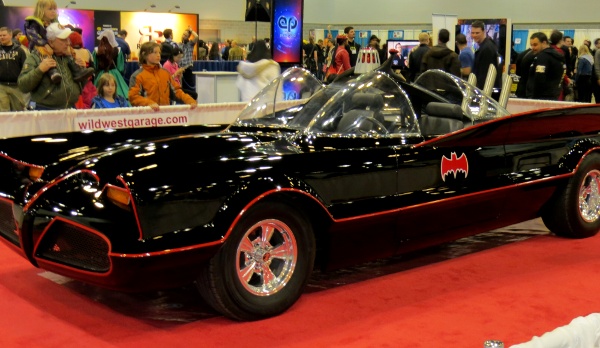 And the Batmobile from the old Batman and Robin TV show! I used to watch that after school! BAFF! Scott and I watched the old live action movie as well on the weekend, to get into the nerdy mood. Good thing they packed that shark repellent! 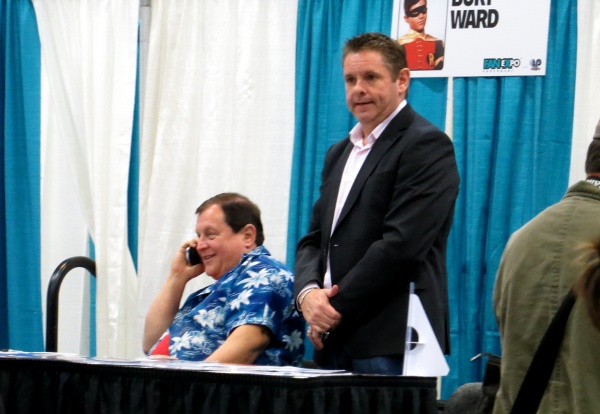 That’s Robin in the Hawaiian shirt. I would not have recognized him if he was not sitting underneath his sign. We also saw Batman, he was very tan.

I really wanted to see Cameron from Ferris Bueller’s Day Off but he didn’t show up at his table for autographs at the time he was supposed to. Bummer. That is my favourite movie. 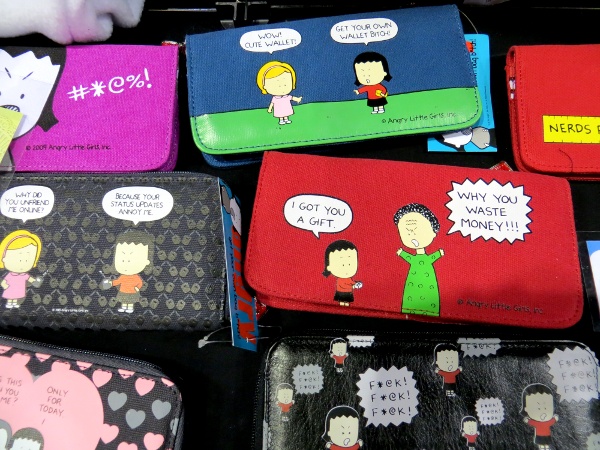 I wasn’t really in to a lot of the stuff they had at the expo. They mostly had old comics, t-shirts, and some figurines and stuff that probably never get taken out of their packages. I did like these wallets though, especially that red one in the middle.

ANYWAY. After the Fan Expo we went to the Canadian Videogame Awards. Since we were VIP we could also go to the VIP reception. 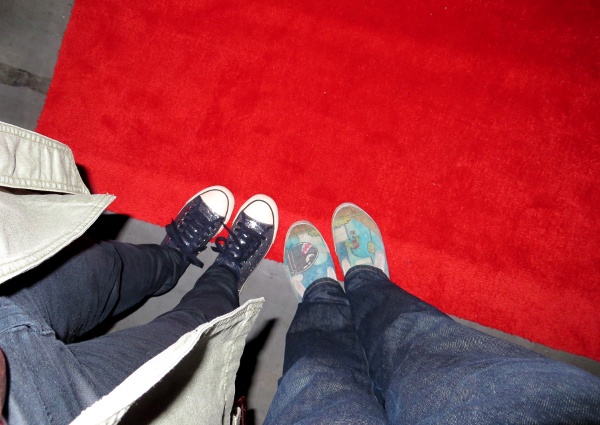 As you can tell from our pictures above with R2, we DID NOT KNOW that it was actually going to be pretty fancy! There was red carpet, and photographers all crammed into a corner, interviewers, etc etc. I kind of shrunk down as small as possible while I skulked past the media area, so no, I didn’t get my picture taken.

They had TVs and couches and consoles with video games to try that hadn’t even come out yet. There was also free wine and beer and snacks. We stuffed our face as much as possible while awkwardly meeting new people.

“Hi, I’m Bob, I designed this video game that is nominated for 4 awards. What do you do?” “Ummm…. nothing?” At least Scott could make small talk about games since he actually plays them!?! One lady said to Scott “She doesn’t play ANY games?” but then I butted in and said I always beat him at NHL 12. Hehe.

At one point Scott went to grab a beer from the waitress and she kind of leaned away and said “its for THEM” and then he turned around and realized we were standing in front of a group of actors from The Killing. Haha. They laughed, and Scott talked with them a bit. I don’t know that show but Scott had watched the first season so he could be a real fan. 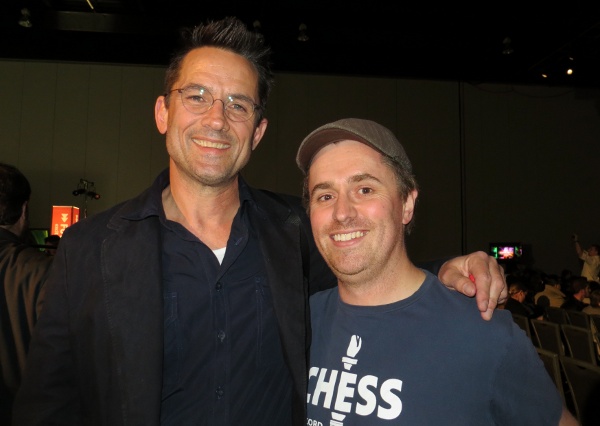 He got his picture with this guy, Billy Campbell, from The Killing and The Rocketeer. 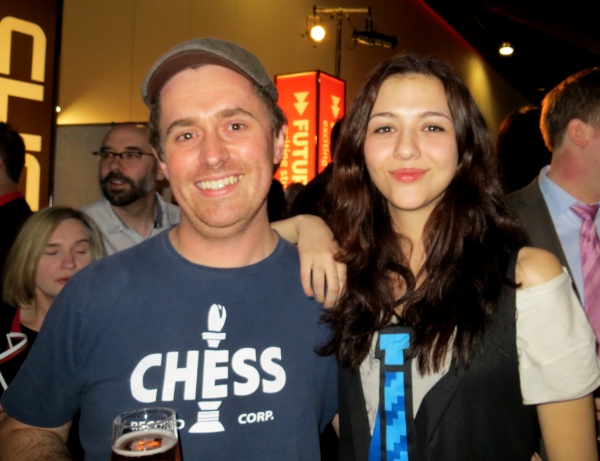 And this girl, who apparently dies in the first 5 minutes of The Killing (not even a spoiler). Haha. I just realized she is wearing a pixelated tie, that’s pretty cool. 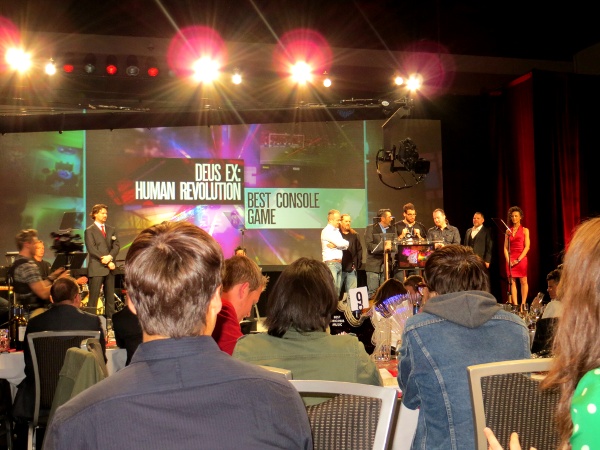 They were filming the awards for TV but it wasn’t live so sometimes we had to listen to the same thing twice. It was pretty fancy for Canadian standards though, haha. None of the “celebrities” were really famous at all but when surrounded by normal people I guess the host of Reviews On The Run counts as a celebrity. Haha. 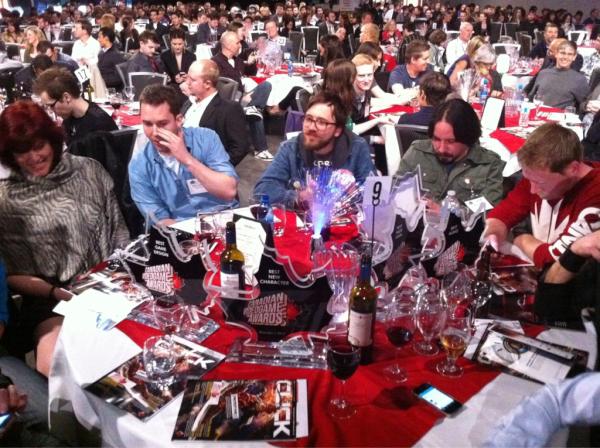 That’s a picture I found on Twitter, of the table that won 8 million awards (for Superbrothers, and Deus Ex). CAN YOU SPOT SCOTT? AND MY HAIR?!

All in all, a very funny night. I’m glad we went. Thanks J9!