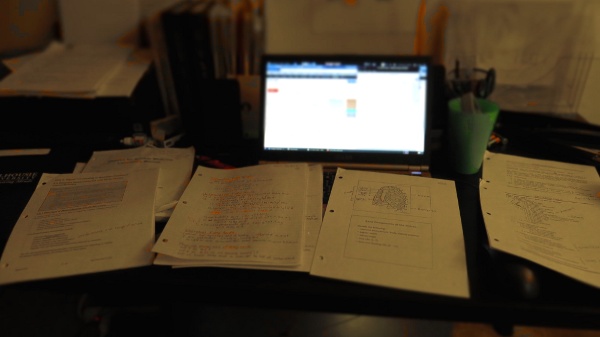 Half the trouble of my nuclear medicine program is just keeping track of EIGHT DIFFERENT CLASSES. Every single day after school I have to do this elaborate sorting routine for all my different subjects, keeping on-going stuff out, old stuff filed, and new stuff waiting for me to work on. Papers everywhere!!

We had a fun weekend. We went out on Saturday to the Vancouver Fan Expo/Nerd Convention, and then attended the Canadian Video Game Awards… as VIP. I think I will write about that in another post though because I have a lot of pictures to prepare and I don’t have time right now. Teaser: It was hilarious, and Scott almost swiped a beer from a celebrity. LOL.

We also went curling with Scott’s work at the new curling facility in Vancouver. It was the first time we had been since our curling season in Melbourne, and was very different. The ice was actually flat! There were no channels or chunks of ice missing. They had scoreboards!! (Electronic ones, actually!) They had 8 rocks for each team! Actually the biggest difference for me was that we didn’t have to throw the rocks so dang hard!! Our team won 7 to 2, woot.