We had an epic time.

Anyway right now we are staying with Scott’s parents. Scott has been applying for jobs like crazy, and I was looking for apartments. We just found out yesterday that our application for a place in St Kilda was accepted so I guess we are moving out soon! It’s just a 6 month lease so we can move closer to our future jobs if we need to.

I can’t do nuclear medicine for a while though. The committee decided I have to write the exam, at the end of October. I haven’t decided yet what I will do until then, possibly some temp office work or volunteering at a hospital, or something else part time while I study. Or 24/7 crafts? 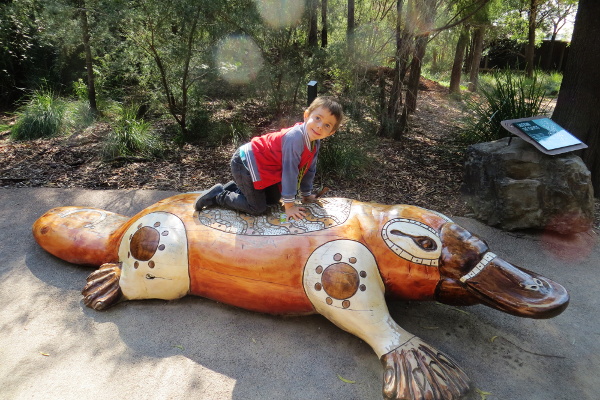 Scott took Noah and Beau to the zoo when they were each around 4 years old, so this visit was good timing for Seth’s turn. We took him to the Healesville Sanctuary for the day, which was also a treat for me since I hadn’t been there before. 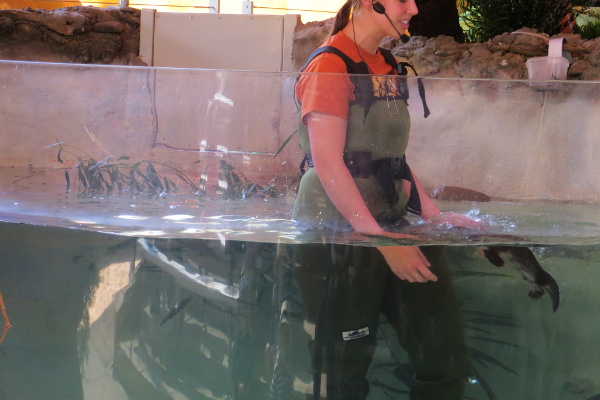 We watched a really cool platypus show. Platypuses (platypi?) are way smaller than I expected. That girl picked Seth out of the whole crowd to come up and feed an eel but he was too shy and passed (while hiding behind Scott). Aww. 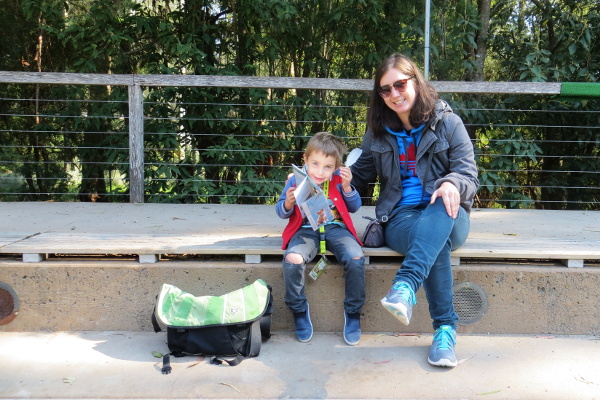 Then we went to a birds of prey show where birds swooped right over our heads. Very exciting. A wild wedge tail eagle kind of ruined the end of the show by scaring away all the demo birds though. Seth is showing off his feather we found earlier. 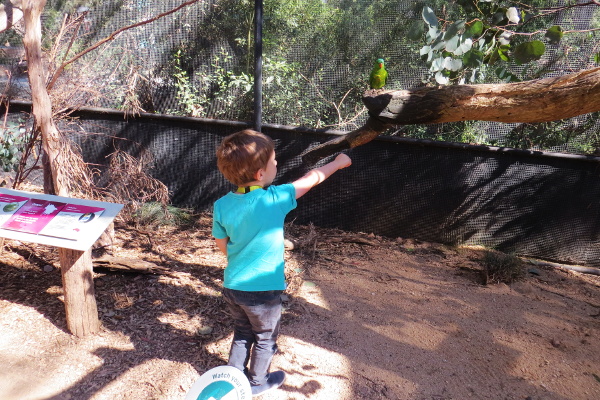 Seth really really wanted to get a bird on his arm. I was impressed by how quietly and carefully he would go towards the birds. Much patience! 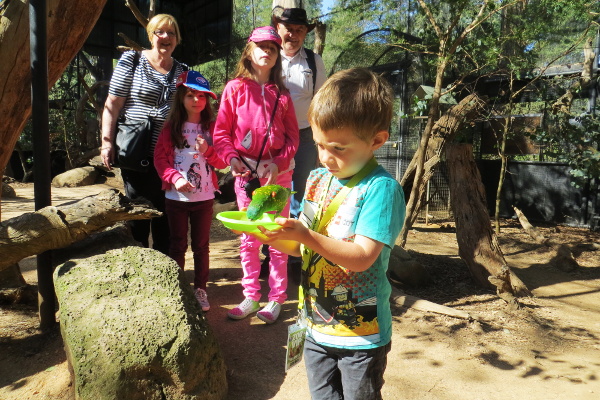 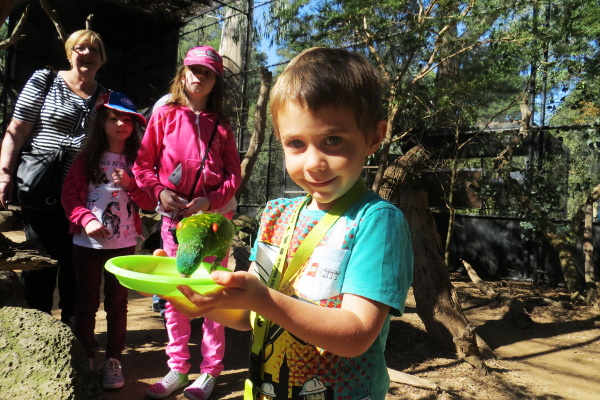 Having a plate of food helped, but he really wanted it on his actual arm. 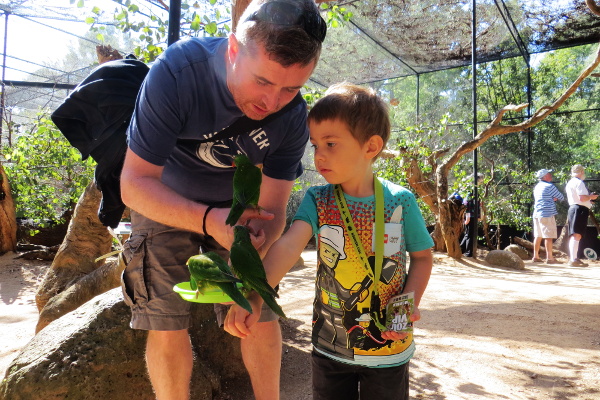 Then we drove back to his house and we all drew pictures of each other and jumped on the trampoline (I taught Seth popcorn) until Michelle and the other boys came home. A fun day!! 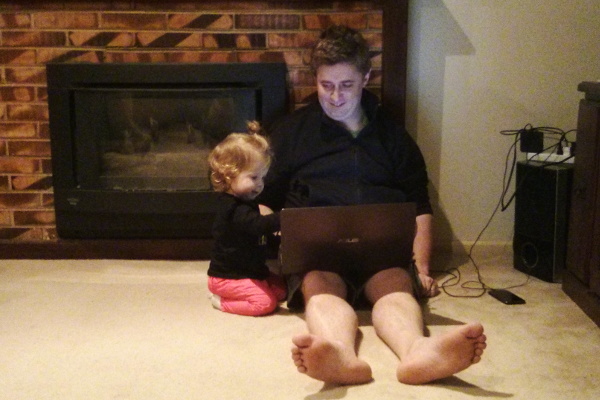 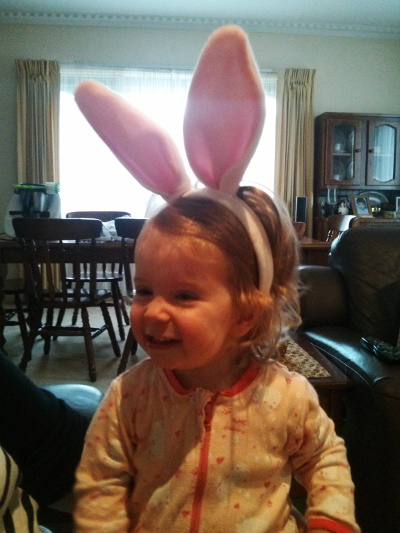 I love that the whole family likes games. Simultaneous Wits & Wagers and My First Carcassonne. 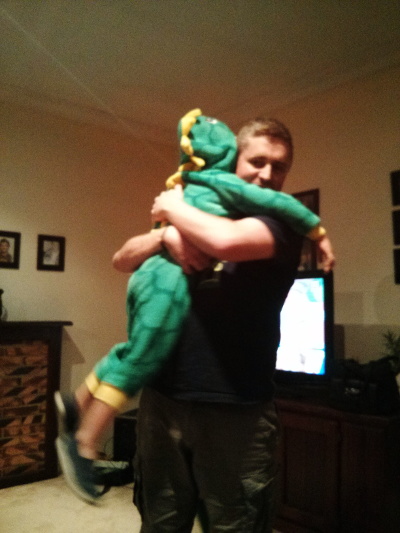 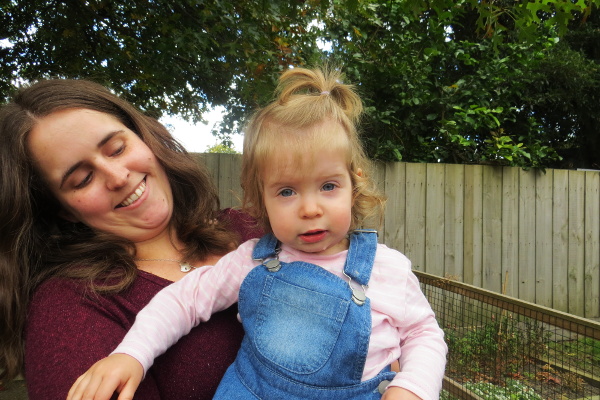 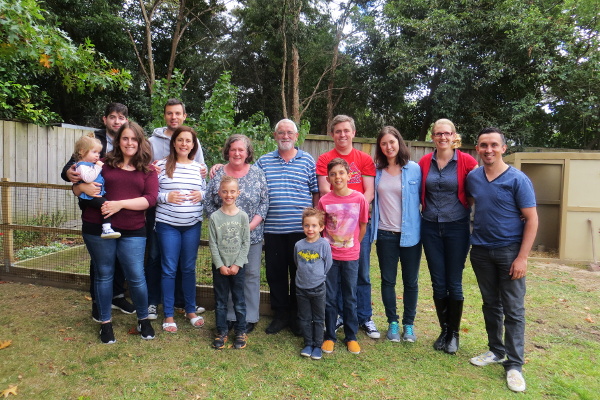 The entire Jorna family together! This hasn’t happened in a long time. It made Pat (Scott’s dad) so happy. :’) 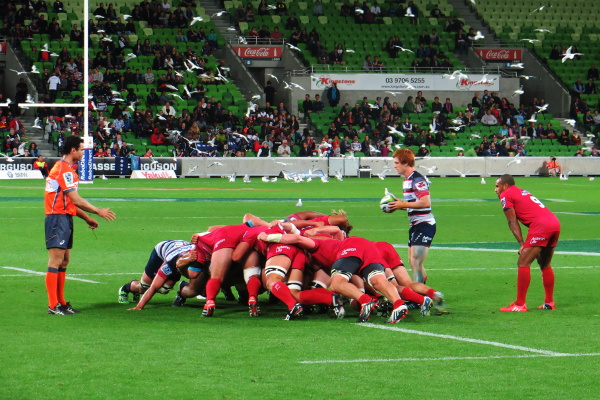 We went to a rugby union game. I learned all about weird things like BORING IN THE SCRUM. 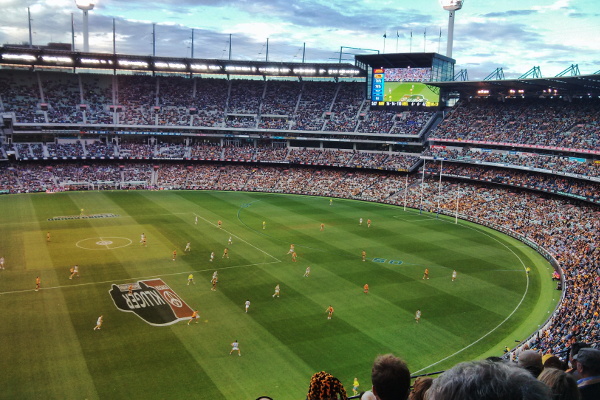 Scott’s cousin hooked us up with ultra cheap tickets to the footy. The Hawks demolished the Cats. It’s one of my life goals to go to a full house AFL game at the MCG (100,000 people) (happens about a dozen times a season according to Scott), and this was close, but not quite. There were 72,000 people there, for a FIRST ROUND GAME! Melbournites love their sports. 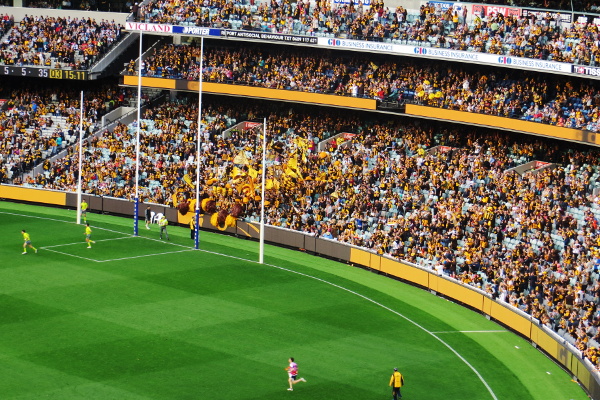 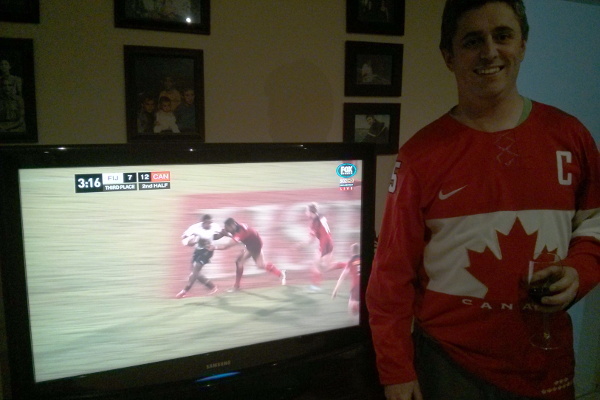 We even caught a Canada vs. Fiji Rugby Sevens game on TV, which made me laugh, and made Scott run to his room to put his jersey on. Canada was even winning for most of the game! But then Fiji smashed us. They seemed like they could run twice as fast as the Canadians. 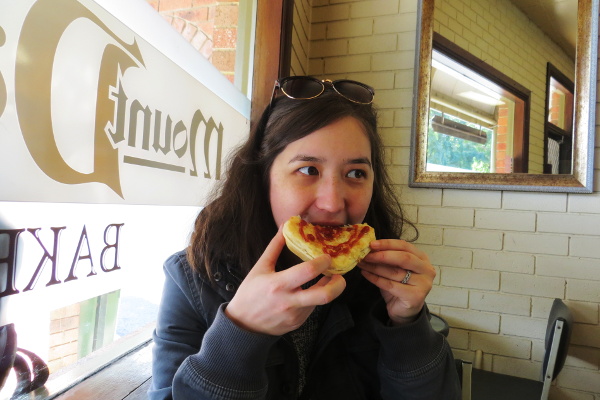 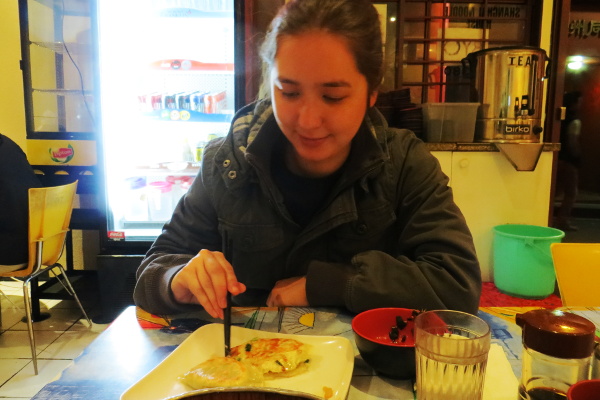 We went out for dumplings, but they weren’t great. Should have researched a bit more about where is good these days. 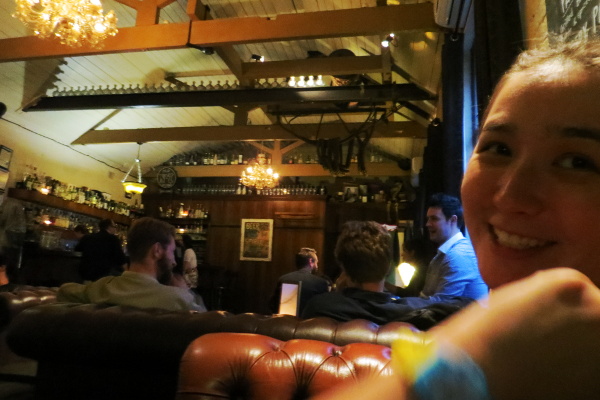 At one of the spots on our impromptu pub crawl. We also went to a bar that was a little house right in the middle of the CBD, and Transport, and possibly somewhere else. Hmm. 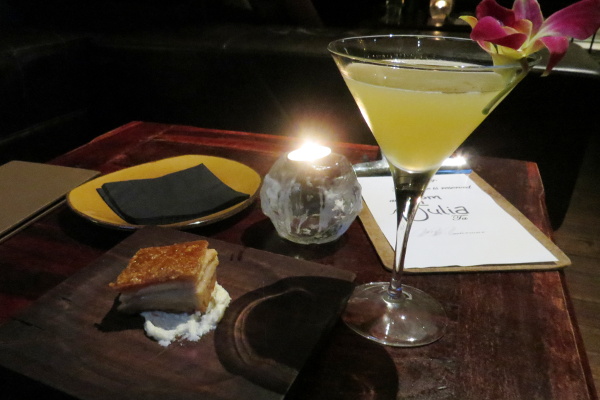 Really expensive fancy margarita and really expensive piece of pork something. Too tipsy to remember the name of the restaurant. The pork was mega delicious though.

I originally planned to do separate posts on all of these topics but now I’m sitting here in YVR airport about to leave for 2.5 weeks thinking I’d better just write a big post to catch up instead.

Scott and I are on our way to Melbourne for #jornapalooza via Guangzhou, China. Apparently we are allowed to leave the airport in China (thanks 72 hour transit visa) so we may explore a bit there too which I am pretty excited about. The subway goes right to the airport so it should be pretty easy. Unfortunately they speak mainly Cantonese there so I won’t be able to dazzle everyone with my sweet Mandarin skills though. But it would be fun to get some street food and look around a bit.

Australia is going to be fun too. The whole family has rented a big house on Phillip Island for the first few days, then Jessie comes to Melbourne for Easter and a baby shower, and then I go to Adelaide for a few days to visit Cassia! I am iksidid.

Anyway that’s pretty much all the updates about what’s coming up. And now to catch up on the last month…

Calgary was super good this year. We spent a week at COP training in the icehouse and on the skeleton track and then competed in an Alberta Cup race on the last day. I had a lot more success sliding there compared to last year. I have learned SO MUCH this season and understood the track and sliding so much more. My starts were very very slow compared to everyone else and I would start each run in last place, but I must be ok at driving because I ended up gaining spots every run. I ended up coming 4th in the race (out of 7 competitors). My goal was not to come in last place and I definitely succeeded in that so I was happy.

This year I stayed at Ally’s house the whole time and that was awesome. It’s always great to catch up with old friends and her and Scott are very fun. I was busy a lot of the time I was there but we still squeezed in going to a nice oyster restaurant, going out to the barn for a ride on her horse, and going to watch some of the Brier curling. BTW curling is really fun to watch live!

Sliding in Whistler was going pretty well too. Sliding from the top was getting less and less scary every day. Every session I would try and push just a tiny bit faster. We ended up having quite a big turnout for our last race of the season, BC Champs, including OTHER GIRL SKELETON SLIDERS!! I came in 4th, aka last place, but I was competing against World Cup/ICC level sliders so that was to be expected. I was still pretty happy because I got a huge PB time on the first day of the race, and then another PB on the second day.

BCBSA ended up giving out medals to the 1st, 2nd and 3rd places, and then a separate medal for the #1 BC slider. Originally they gave the BC medal to Jane, because she is from North Van (although she hadn’t even been in Whistler all season). But after the awards she came over and put the medal around my neck. She said I should have it because of my two PBs. :’) It meant a lot to me, that was really nice of her. So I now have my first skeleton medal.

I took a pretty big hit on my last run of the race so I decided that was a pretty good time to end the season. It has been nice to have spare time again, tbh. It was such a good season, with our new coach and new friends and new teammates. I learned SO MUCH. And now I have 6ish months to try and get stronger and faster on land before next season and tryouts. My goal for next year: an international race… which should be possible because I should be able to at least do the Whistler NAC race. Fingers crossed.

Once I get back from Australia I am starting weightlifting lessons two times a week (instead of once a week) so next time you see me I’m going to be ripped.

All joking aside, this was actually a really tough week. Wednesday morning at work we all found out that our boss had unexpectedly passed away the day before. It was a huge shock and a huge loss for us all. He and some of my coworkers had worked together for more than 20 years, and his partner also works in our department. So so so sad. He was such a great guy and definitely a lot more than just a boss to us. Our work family lost a good friend. I will miss him.

Well we are getting pretty close to boarding time so I’m going to post this and get ready to go. Until next time (hopefully not for so long).

I finally got around to getting a photostitch program (free and legal I LOVE LINUX) and made up a few panoramas from the past year or so. Check them out.

The MCG in Melbourne

On the West coast of Australia

From the lookout between Kailua and Honolulu, Hawaii

A beach in the North part of Oahu, Hawaii